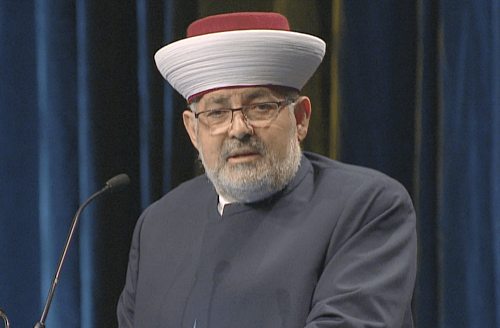 The “Quebecois” imam Hassan Guillet hopes to represent the voters of Saint-Léonard-Saint-Michel, in Montreal, in the House of Commons. As you can see from his headgear — the truncated Santa Claus hat — in the photo of the illustrious cleric, he is a graduate of Al-Azhar University in Cairo, which means he is a top-tier scholar of Islamic law.

Many thanks to Ava Lon for translating this article from the French-language public broadcaster in Canada:

[Photo caption: Hassan Guillet became known worldwide in 2017, during a speech at the funeral of the victims of the Quebec Mosque. Photo: Radio-Canada]

His sermon went around the world in the aftermath of the bombing at the Quebec mosque. The spokesman for the Council of Quebec Imams now wishes to join the troops of Justin Trudeau. Hassan Guillet will be a candidate for the Liberal nomination in the riding of Saint-Léonard-Saint-Michel, in Montreal, in an upcoming by-election.

Hassan Guillet announced his intentions on Facebook on Friday: “I’m planning to run for the federal elections.” Then he confirmed it Saturday, after a call from Radio-Canada.

The Imam of the Saint-Jean-sur-Richelieu Mosque, a resident of Saint-Rémi in Montérégie, took the opportunity to publish his curriculum vitae. A retired engineer and lawyer, he has been Director of Strategic Purchasing for Bombardier and is fluent in seven languages.

His intentions sparked a debate on social networks. “An imam is perceived as a religious man, and a religious man has no place in politics in a secular state,” said Lamine Foura, the founder of the Maghreb Congress in Quebec.

“The candidacy of an imam will be perceived as an interference by religion in politics.” —Lamine Foura, founder of the Quebec Maghreb Congress.

“It’s not an imam who is running,” answered Hassan Guillet. “It’s a multilingual man with a multidisciplinary background and a universal and multi-faith culture.”

Hassan Guillet later stated that he would give up his role as imam from the beginning of the election campaign. “I won’t wait until I’m in the House of Commons.”

Saint-Léonard-Saint-Michel MP Nicola Di Iorio announced his resignation in late April. Prime Minister Trudeau will have six months after the member’s departure to call a by-election.

Other religious clerics have been involved in politics in Canada.

For example, in 1976, the priests Jacques Couture and Louis O’Neill were appointed ministers in René Lévesque’s government.

And in 2006 Father Raymond Gravel was elected a federal member for the Bloc Québécois.