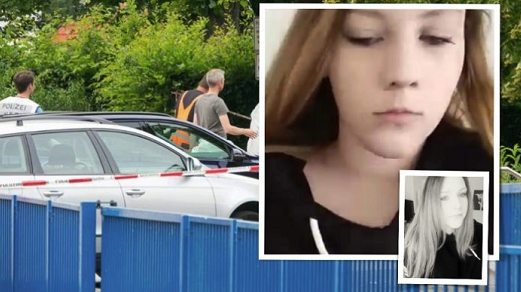 Another gruesome murder took place in the Hannover region over the weekend. Many thanks to Nash Montana for translating an article from Politically Incorrect and a video on the same subject, and to Vlad Tepes for subtitling the video:

Anna-Lena Theis: Suspect in the murder is from the Dominican Republic

The butchery continues. In the murder of the 16-year-old Anna-Lena Theis from Barsinghausen by Hannover, a 24-year-old suspect was arrested on Monday evening. The suspect has German and Dominican citizenship, the police in Hannover stated. Witness testimonies and investigations have led to the man. It is now further investigated whether suspicions against the 24-year-old “Dominican” can be confirmed.

Anna-Lena Theis was first reported missing by her godmother, with whom she was living. The 16-year-old girl was visiting a city festival in neighboring Ronnenberg with her best friend. After the festival they took the train back to Barsinghausen where they intended to meet more friends at the train station. It is here that Anna-Lena Theis was last seen alive about 1am, and her cell phone was disconnected at 1:30am. She took the last S-train from Hannover towards Haste and exited the train at the Barsinghausen stop.

In this idyllic neighborhood of Barsinghausen, hikers made a grisly discovery on Sunday afternoon about 2pm: Directly in front of the Adolf-Grimme-Elementary school the body of Anna-Lena Theis was discovered lying in the grass. Anna-Lena was on her way home; she was a mere few hundred meters away from her house.

Prosecution: “Extremely Raw Use of Violence”

One resident recounts that she heard screams in the middle of the night. “A man and a woman fought loudly. But I didn’t think anything of it.” The autopsy of the 16-year-old Anna-Lena showed: “A massive blow against her head” was the cause of death. According to the current investigation, a sex crime did not take place after the murder.

[WHAT?? “A sex crime did not take place after the murder”? In other words, this was not a sex crime? Despite her missing her lower clothes, the guy probably attempting to rape her and when she defended herself, he killed her, and that is not considered a sex crime??? — Translator]

Peter K., the man who discovered the 16-year-old’s body on Sunday, said that Anna-Lena’s body was naked from her breasts on down. “I was riding my bicycle as I often do, and then I saw her,” the 77-year-old says, pointing to where he found her body. Slightly hidden behind a tree with her head resting against a small wall. “We don’t even dare going outside anymore,” says a woman with shock in her voice. Within exactly two months two women in Barsinghausen have been murdered, the woman doesn’t feel safe anymore. Later in the evening members of the family and friends of the victim came together where she was found, lit candles and put down stuffed animals in memory of the murdered girl. Priests were on hand, and one very upset school principal who asked for understanding because she didn’t want to answer any questions. Classes at the elementary school continue in the meantime. And the Barsinghausen “Bert-Brecht School” nearby has even been considered a “school without racism” since 2004 — with much, much tolerance!

Exactly two months ago: Murder of “Anka” Veronika B. at the exact same location

Near the Adolf-Grimme-Elementary in Barsinghausen another woman, Veronika B. was brutally murdered on April 17th of this year. A woman discovered the dead body when she was walking her dog along the irrigation ditch. 55-year-old Veronika had also been brutally murdered. No viable proof for the identity of the murderer has been found. “We are now investigating whether there is a connection between the two murders,” police spokeswoman Kathryn Pfeiffer says. And in this case, too, just as in Anna-Lena’s case, police are still looking for witnesses who may have seen or talked to her shortly before her death. Veronika was called “Anka” by her friends and family. The police are taking witness reports at the number 0511-1095555 in both cases, Anka and Anna-Lena.

Chief prosecutor Thomas Klinge from Hannover: “Unfortunately we still have no new insights in the case of Veronika B. We will see if we will get new insight and knowledge in connection with this new case.” The chief prosecutor deems a connection between the two murder cases entirely possible: “It is not extremely obvious, but in such a small peaceful city as this one, with both times violence against women, a connection is more than possible.” Both victims were killed by the “extreme use of violence”. The new case is just downright gruesome for the parents to digest, and he promises: “We will do everything we can in order to solve this case.”

Lucy K., too, was attacked by an unknown subject — the investigation into her case has been discontinued

Andrea K. and her 16-year old daughter Lucy have also come to the site where Anna-Lena was found, to say their goodbyes. “Anna-Lena was a good friend of mine”, says Lucy. She barely escaped an attack a few short weeks ago. On May 23rd Lucy was walking to school when she was stopped by an unknown person around 9:45am. He grabbed her, but she was able to free herself, and ran away. Since then she and her mother have been living in fear. “Lucy had horrible major bruises all up and down her arms,” Lucy’s mother Andrea K. reports. On day that it happened, mother and daughter went to the police to make a report, and they gave a very detailed description of the man who attacked Lucy. But nothing has come of it since then — and now Anna-Lena Theis is dead.

Anna-Lena’s grandmother also visited the site where her granddaughter’s body was found on Monday. She had always called her daughter “little star”.

The discovery of Anna-Lena’s body on Sunday in Barsinghausen was also the second violent crime that was reported over the weekend in the Hannover region. On Saturday a woman died after “a man” attacked her with a knife and stabbed her multiple times, injuring her gravely, in the east end of Hannover. The alleged suspect was then apprehended in Bielefeld after he had fled the scene and been chased for several hours by the police. A judge ordered immediate custody for the suspect. The alleged suspect Bülent I. took off immediately after he committed the attack, and it took several hours to find and apprehend him in Bielefeld on Sunday night. The police initiated a large-scale search and had publicized a picture of the suspect. The attack happened out in the open on a street, and according to a statement by one witness, multiple neighbors had heard the woman scream for help and they had alerted the police.

Sunday night, Bülent I. was transferred to Hannover — and on Monday afternoon he was brought before a judge. The judge ordered the 57-year-old Turkish man to be taken immediately into custody.

Even Heribert Prantl, a journalist for the liar paper Sueddeutsche Zeitung, reported about Anna-Lena Theis’ case, but he conveniently left out crucial details. A country that can’t figure out how to protect its women and children with the law is doomed to go extinct.

14 thoughts on “Another Young Girl Murdered in Barsinghausen”