Today is Sweden’s National Day, but the concept of “nation” is so passé now, especially in the Enlightened Scandinavian Utopia, that observing it in the traditional way is somewhat of a solecism.

Our Swedish correspondent LN has compiled a report on the latest instances of dedicated doctrinal innovation in the New Sweden.

When the municipality of Falun celebrates National Day on June the 6th, a “prayer for diversity” has a place on the schedule for the municipality’s inhabitants, reports Samhällsnytt.

The municipality’s celebration of the National Day takes place at the old Falu Copper Mine and begins with a “New Citizen Ceremony”.

All New Citizens will be welcomed by the municipal council chairman Anna Strindberg (Socialist).

After that the “Culture School’s Samba Parade”, performs and then a traditional national celebration with speeches, music and raising of flags will take place.

The festivities will end with a prayer for “Diversity and Peace”, writes Falu Municipality on its website.

2. A Mega-Mosque for Rinkeby

A new mosque will now be built in Rinkeby, Stockholm. It will be 5,000 square meters in size, have 18 domes, and cost 100 million kronor ($10,000,000). The construction company NCC, which will build the mosque, is lyrical about the project. 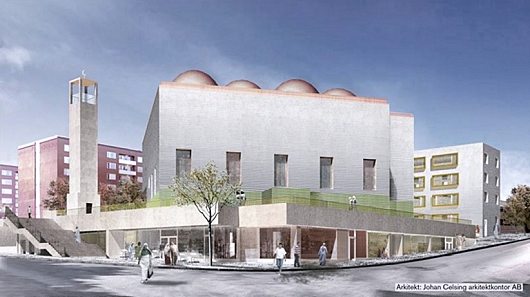 NCC and the Rinkeby Mosque’s Collecting Foundation have now initiated a collaboration to construct this great mosque in Rinkeby, northwest of Stockholm.

The total contract for the project is expected to amount to approximately SEK 100 million, NCC announced in a press release on Tuesday.

The new mosque will be built at Rinkeby Allé, and the site is in close proximity to the new police headquarters, which NCC is currently building .

The mosque will thus be next to the new police station.

“Those who live here have longed for the mosque; no one has complained or appealed. It shows that there is strength and joy in the community that this spiritual space will come,” says Ibrahim Bouraleh from the Muslim foundation.

According to NCC, the architect Johan Celsing has developed a design proposal for the mosque in which it has 5,000 square meters, 18 domes and spaces for prayer rooms, cafés and classrooms.

He explains that the special thing about the mosque will be that it faces towards Islam’s holy city of Mecca, and thus will vary from the “right-angled grid in the district”.

The exact form of the final design will be worked out by the parties during the design phase, it is said.

“This assignment allows us to build upon the positive experiences we have in place in Rinkeby, for example through the construction of the police building, and to be involved in the continued development of Rinkeby.”

3. Swedish Anarcho-Tyranny is rolling on

Just two examples of very many: