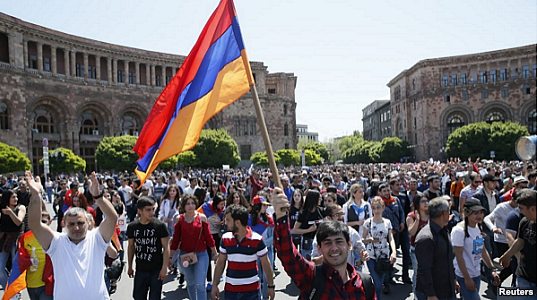 A “color revolution” is underway in Armenia, and it appears that the protesters have achieved their goal.

Many thanks to JLH for translating this article from Bild:

Accompanied by Horns and Dancing, the Coolest Revolutionaries in the World Come to Power

BILD describes the situation in Armenia — the land that is suddenly making headlines. They are celebrating the success of a velvet revolution that is said to have paved the way for a regime change.

Yesterday an opposition politician and today leader of a revolution, Nikol Paschinian (42) is on the way to power in Armenia. And he is already the hero of the “little people” who are lining up to embrace him.

Paschinian’s followers are singing and dancing in the squares of Armenia’s few cities, and driving through the streets happily blowing their horns. In the capital of Yerevan — geographically in Asia, but culturally European — there is a festive atmosphere. After days of a street blockade, everything points to a power transfer on May 8th.

But the victory of their peaceful revolution is by no means certain. Pessimists still fear that the old system will strike back by sending in the police and military.

The hopes of many Armenians for a peaceful revolution and an end to nepotism at the levers of power rest upon Nikol Paschinian.

“The problem is as good as solved”

What had happened: After their defeat in parliament, the protest movement in Armenia had yesterday instituted the largest blockade ever of public life in the ex-Soviet republic. Even through roads, the international airport at Yerevan, the train to Georgia and several border crossings were affected.

Most of the young demonstrators formed human chains and waved red-blue-apricot banners. The apricot is the most important export of this bitterly poor country. So the revolution is also being called the Apricot Revolution.

A whole country blockaded by singing and dancing demonstrators

Yerevan is rumbling. It is the greatest revolution in a former Soviet republic (three million residents) since the pro-European Maidan movement wave of protests in the Ukraine in 2013-2014.

On Thursday, the hitherto ruling Republikan Party announced it, too, would support the opposition candidate. A session of parliament was scheduled for May 8th, to elect a new Prime Minister in a second ballot.

In the evening, the great hope [Paschinian] announced the temporary end of the protests. “The problem is as good as solved,” he announced to tens of thousands of people in the capitol. All parties had declared their support for his candidacy.

And the coolest revolutionaries in the world have achieved their goal.

Despite the fact that the world hardly noticed their protest. In their euphoria, the demonstrators expect an end to the corruption and stagnation in Armenia. They hold the ruling party responsible, and have forced its leader, Sersch Sargsian, to step down as prime minister.

Even the evening rallies in the capitol have remained peaceful. Like a street blockade on grandma’s living room rug. The Armenian police appeared, but refrained from action.

The danger: At least until May 8th or new elections, the apparatus of state remains in the hands of the Republikan Party.

Developments from Russia are being eyed suspiciously. Moscow tends to reject so-called “color revolutions”, that is, transition of power through pressure on the street. Russia maintains a military support force in Armenia (3,000 soldiers). It is protection for the Armenians, who have a hostile history with their neighbors Azerbaijan and Turkey.

For a different take on the “Apricot Revolution”, see this article by Srdja Trifkovic.

8 thoughts on “The Coolest Revolutionaries in the World”