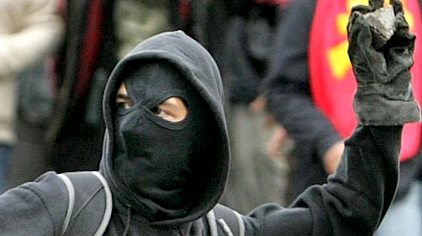 The following article from Politically Incorrect reminds us just how routinely violent the anarchist Left in Germany is. Only when the antifa go too far — which in this case is WAY beyond the bounds of civilized behavior, and directed at the police themselves — does the government dare to call them on their behavior.

There is a “new quality of violence against police and their relatives,” say the police in their report on an attack by leftist street gangs against an officer and his family. After an anti-atomic power demonstration on Friday evening, approximately 60 masked persons in the district of Lüchow-Dannenberg are reported to have stormed onto the property of a police officer. According to the police report, the family, alone in the house, was intimidated by the masks, attaching of banners and loud rioting.

After police forces were alerted, they were able to push out the perimeter. In the process, it came to fist fights and physical resistance. The police detained persons from the local as well as the further-flung “leftist scene” on the spot, pending identification, and initiated in consultation with the Lüneburg prosecutor charges of disturbing the peace, threatening, verbal abuse, theft and resisting arrest. Some individuals were taken into custody on the basis of assessed potential for danger. All others were prohibited from returning to the area.

“The police in the area condemn most strongly the aggressions and attempts at intimidation directed at our police officials and their families. Targeted attacks on police officers as private persons, and on their families achieve a new dimension of violence against police officials in the region. This requires total societal opposition, by all legal means.”

That’s a mouthful! We are already acquainted with words like “total societal opposition” from statements in reference to the AfD or “right populists.” As to the photophobic leftist mob, we must be understanding of their “excited protest” which has been exaggerated by “the Right.” So what’s new?

It all seems to be new and surprising for Lower Saxony’s Interior Minister Boris Pistorius, sturdy warrior against the Right and shield of the Left. He writes on Facebook: “I am absolutely appalled by this. It is an incomprehensible violation of limits by this group.” Pistorius says “it’s an incomprehensible violation of limits by this group.” He is clearly at pains to emphasize “this group” rather than leftist terrorism in general in Germany, as expressed last year by an unspeakable act of violence at the G20 Summit.[1]

No one is “appalled” even when the leftist mob harasses AfD campaign booths, physically attacks AfD politicians, burns their cars, defaces their houses, or pummels peaceful demonstrators on their way to Pegida demonstrations

No, of course not, for most of them are, after all, victims “of our society,” and have a right to bring their “understandable” rage to the streets in an act of, so to speak, artistic freedom and thereby make it that much more colorful. And the threatening of the officer and his family was presumably just an application for political office. Beating up on police officers can get as far as the Foreign Minister.