Today is the 200th birthday of Karl Marx. The occasion is being commemorated in Trier, the great philosopher’s birthplace in Rhineland-Palatinate.

Numerous dignitaries are on hand for the ceremonies, including Jean-Claude “Drunker” Juncker, the president of the European Commission. Mr. Juncker will give a speech and unveil an enormous bronze statue of the Father of Communism, which was donated to Trier for the occasion by the Red Chinese. The unveiling and speechifying may already have taken place: it’s late afternoon now in Trier.

As our own modest contribution to the joyous celebration, we are unveiling this special meme-orial image of the paladins of Communism: 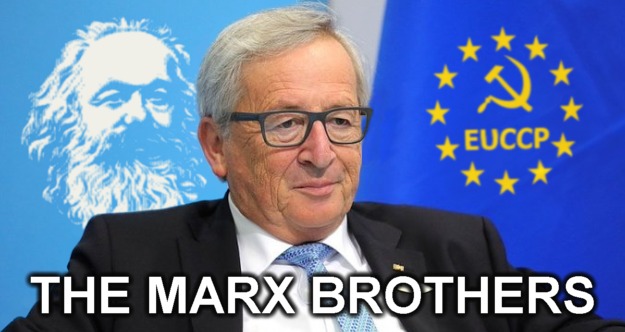 I couldn’t resist digitally modifying the above photo, which accompanied a tweet from Poland Daily:

“The President of the #EuropeanCommission, Jean-Claude #Juncker, has decided to attend the 200th anniversary of the birth of Karl Marx. The decision is a slap in the face of the almost 100 million EU citizens who were forced to live under communist occupation after 1945. pic.twitter.com/Mqzyc4bTlB”
https://t.co/Mqzyc4bTlB

For a dissenting point of view on the great prophet from Trier — who now rests peacefully in a cemetery in Highgate — here are excerpts from an op-ed in the Irish Times. Patrick Smyth reminds us not to conflate Mr. Marx with the tiny minority of violent extremists who have hijacked a great political philosophy and commit atrocities in its name:

Two centuries later, the ‘father of communism’ should not be judged on disciples’ excesses

by Patrick Smyth in Brussels

His view over Brussels’s magnificent Grand Place from La Maison du Cygne was a vivid architectural representation of what he was trying to write. History as class struggle.

The tall gothic and baroque guild houses, an expression of the rise to pre-eminence of the merchant bourgeoisie, and the town hall spoke of municipal power and wealth. And surrounded by a city teeming with the poor and hungry. . .

And in the back room of what is now one of Brussels’ most chic restaurants, with friend Friedrich Engels, he laboured over their most important work, The Manifesto of the Communist Party, part-groundbreaking philosophical and historical thesis, but above all a call to action that would reverberate around the world.

Two hundred years ago next Saturday, Marx was born in the small German town of Trier, where EU commission president Jean-Claude Juncker will deliver a speech for the birthday unveiling of a 5.5m statue of the local boy, a gift from the People’s Republic of China.

“Nobody can deny that Karl Marx is a figure who shaped history in one way or the other,” a commission spokeswoman defensively insisted. “Not speaking about him would come close to denying history.”

His intellectual legacy is everywhere. Last week with a laugh, a senior Irish diplomat described to me the “mao dun“ — Chinese for “internal contradiction” — at the heart of a commission proposal. Doomed, he was suggesting, like capitalism and its contradictions, to the dustbin of history.

Neither Juncker nor my diplomat, you may be relieved to hear, are closet Marxists, but in the wake of the financial crisis of 2008 , they, like many others, economists, historians and philosophers, have been willing to look again seriously at the ideas of a man at whose door most of the 20th century’s woes have been unfairly laid by conventional opinion.

And yet. No more than the bloody crusades, or the terreur and the guillotine can be said definitively to characterise Christendom or the French Republic, Marx too can and must be rescued from his disciples’ excesses and intellectual rigidities. “If anything is certain,” he would claim to “revolutionary phrase-mongering” adherents, “it is that I myself am not a Marxist.” 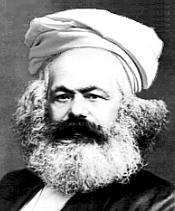 Rescuing Marx is first and foremost about rescuing his thinking from the charge — a caricature — of dogmatism and rigidity. On the contrary, it is above all a methodology of thinking and analysis, not a fixed position, not a political programme, nor a set of explicit prescriptions for the world’s ills.

One that explores the dynamics of constant change in the economic, political and ideological spheres as the working-out of contradictions. In Marx’s view, these are the tensions between old ways of creating the means of survival, and their social organisation, and new, emerging forms of economic and political organisation. Irreconcilable opposites in whose synthesis the new world is created.

But for Marx, and his “historical materialism”, history itself was inherently open-ended: “All history is nothing but a continuous transformation of human nature.”

“In Marx’s vision, which cannot recognise anything as absolutely final,” the late philosopher István Mészáros wrote, “there can be no place for a utopian golden age, neither ‘round the corner’ nor astronomical distances away. Such a golden age would be an end of history, and thus the end of man himself.”

For a different Irish take on the Philosophy of Peace, see this series of essays by Mark Humphrys.