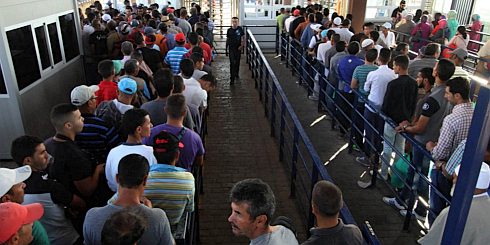 The following report from the Spanish daily El Pais exposes false visas being issued by Spanish consulates in Morocco. Many thanks to FouseSquawk for the translation:

The lack of means and controls foments a black market of documents in consulates at a price of up to 8,000 Euros

Photo caption: Moroccan citizens form a line to gain entry to the city of Melilla.

Rabat (2016 and 2018), Tetuan (2003), Tangiers (1996 and 2010) and Casablanca (2007) have been in the news due to the appearance and detention of schemes of buying illegal visas in Spanish consulates. Ever since this bureaucratic step was imposed in 1992 in order to cross the strait, the cases and irregularities have gone up periodically and with almost identical procedures. A band of local counterfeiters, more or less similar, infiltrate themselves at the entrances of Spanish consulates (which laboriously issue with long lines some 150,000 visas a year) using the services of one or various “local or Spanish functionaries” and make it easier to overcome the bureaucratic barriers for a price that ranges in recent years from €5,200 to more than €8,000. Last week the latest two detentions in Rabat were produced. After the last operation, reported in these same offices in 2014, the Foreign Ministry sent in an inspection in 2017 which resulted in proceedings (against two officials though in the preliminary stage). The volume of the falsifications and the business is incalculable.

The case of the mafias and the purchases of illegal visas in the Spanish consulates in Morocco is the most worrisome and important due to its quantity and the proximity of the country to Spain and its entry into Europe. But it is not unique. Last March, Bolivian police dismantled a similar gang that operated within the consulate of Santa Cruz de la Sierra in Bolivia with similar methods. The alarm signs detected were different and the result of the operations and the internal investigations practically the same: Silence, forget, look the other way, and go back to the beginning.

One of the interventions carried out in a Spanish consulate in Morocco happened after the falsification of the visa of a young man admitted to a Belgian hospital. In Rabat, the grand scheme began to fall apart in 2014 thanks to an anonymous report from a local journalist from Nador (Morocco) , with whom embassy personnel spoke, which provided a lot of data and led to the discovery of 18 false documents. That report with the internal report was sent to the central headquarters of the Ministry in Madrid, which ordered a general inspection in 2017.

In the Office of Diplomatic Information (OID) this inspection is related to the two detentions on the part of the General Directorate of National Security (DGSN) of Morocco last week revealed by the local daily, Assabah. The newspaper reported a gang made up of 13 members and four local functionaries infiltrated the services of information and investigations. One of them had dual nationality. The Ministry has opened another internal investigation, although it affirms that Morocco has not communicated the reason for the detentions. The last one, that of 2017, concluded with the dismissal of two employees who then filed a lawsuit in Madrid with the Social Court that has just been dismissed. One of them, the ex-head of services, Rosario Castillo Garcia, warned that during her time the Tangiers consulate had issued 25 false visas in a review of those issued in two weeks. Then, when discovered in Rabat, asked for a transfer to Madrid and early retirement.

The consulate in Rabat issues some 35,000 Schengen visas a year and another 9,500 of nationals for family reunification. In the visa department, there are four chiefs and between 8-10 local employees. They are saturated, and more so in the summer period when the schemes intensify to 40% of the papers presented. All of those documents are impossible to verify. In addition the falsifications are good, very professional. When they arrive for the signature of the chancellor or consul, they barely have time to put their signature on them. Some heads or employees spend (it is common to transfer within the same country) decades in this consulate or others in Morocco and know all the nooks and crannies. The consul and the chancellor change destiny.

In Madrid, in the ministry, they allude to the flood of work as justification. They receive 1,000 complaints a year from their 90 consulates (from the two million transactions carried out) and in its annual plan, six inspections per year are mandated.

One thought on “Traffic in Forged Spanish Visas in Morocco”