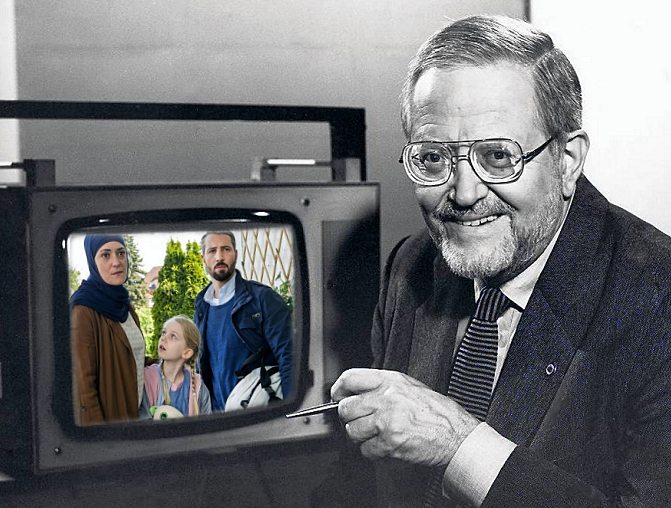 The video below is blatant piece of pro-Muslim propaganda from a German state-TV affiliate. Egri Nök, who translated the brief clip for subtitling, suggested the digitally modified photo used at the top of this post, and includes these introductory notes about it:

Karl-Eduard Richard Arthur von Schnitzler (1918-2001) was the chief commentator on DDR TV, and author and moderator of the agitprop TV show “The Black Channel” (which was entirely devoted to anti-Western propaganda). To East German citizens, he was the most controversial (i.e. hated) journalist of the DDR.

He was nicknamed Sudel-Ede in the West, “Dirty Ede” (literally: besmirching Ede), because his sole aim was to besmirch the West.

He joined the Socialist Youth when he was only 14 years old; was captured by the British in WW2 and learned his trade at the BBC. He worked in Hamburg and Cologne after WW2, but got fired in ‘47, because the Brits found his commentaries increasingly communist. He moved to the DDR in 1947. In 1948 he joined the SED (Sozialistische Einheitspartei Deutschlands — the ruling party in East Germany, which eventually morphed into Die Linke after the Wall fell), became a commentator at the Berliner Rundfunk, in 1952 the chief commentator of the broadcast committee, and then chief commentator of DDR TV.

Schnitzler became well-loathed because of the huge discrepancy between what citizens saw and his commentaries. That is why his name is heard so often these days.

He would tell people how well-off the DDR was, and how the West was jealous, when shelves in the shops were empty. So when you see refugees harassing someone in the street, and then turn on TV and find films about how lovely the religion of peace is, and how hard-working and 17-year-old all migrants are — that is when the name Karl-Eduard von Schnitzler comes to mind.

He died a member of the DKP, communist party of West Germany, however — shortly before the DDR fell, the SED had to kick him out, because he had become so hated, and people chanted slogans against him in the demonstrations. “Schnitzler lass das Lügen sein” — “Schnitzler quit the lies,” etc.

8 thoughts on “The Islamization of the German Family”