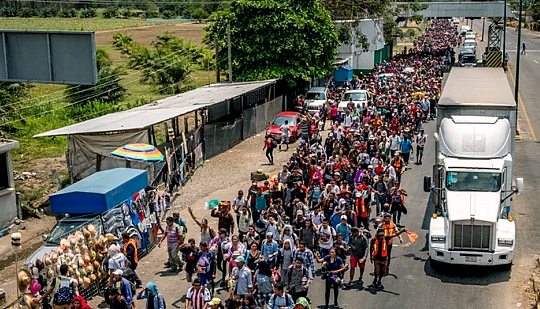 An excellent post from the Diplomad in which he outlines a robust approach to the problem approaching our southern border. If our readers have other suggestions (mayhem not being one), please share:

A couple of days ago I posted a piece on Trump’s foreign policy with a reference to the ancient Arabic saying, “The dogs bark, but the caravan moves on.”

News reports tell us there is another sort of caravan on the move. Some 1000-1200 Central Americans, aided it seems by progressive groups and the Mexican government, are “marching,” driving, hiking, riding a train, whatever, on their way to the USA. It is some self-proclaimed “freedom caravan” that intends to arrive on our border, stream across, and then claim asylum in the USA from the violence in Honduras.

This seems to be a new take on the Moroccan “Green March” of 1975 used against Spain in the Western Sahara. The idea is to defy the superior armed Western power to use force against a “popular” march which seeks only some altruistic goal. Very touching. You will notice these sorts of tactics are not used against certain countries known to shoot without compunction.

Anyhow, this little stunt is outrageous as it is being, as noted, aided by a nominally “friendly” country, Mexico (see my take on Mexico’s friendliness here and here). Not only that but legally the marchers have no case. If they are fleeing Honduras, they can seek asylum in Mexico, the first stop in their “escape.” Mexico has the responsibility to grant them asylum, turn them over to the UN, or return them to their country of origin.

We cannot just have the dogs bark. They have to bite.

One of the articles I link above noted that Mexico has over fifty diplomatic and consular missions in the United States; Honduras has about dozen missions here. All of these, the Mexican ones especially, are centers of political and immigration activism. The Mexicans, as I have noted before, have been quite open in their meddling in our internal affairs, including in the last elections.

We need to tell these governments in no uncertain terms that we intend to shut down half of their missions immediately, and will shut down others in accordance with their behavior. We, furthermore, need to tell them that we will cease issuing visas, and even shut the border to normal trade and tourism if these sorts of officially tolerated and sponsored events occur.

This is no joke. Serious as a heart attack.

Thanks to Bill Keezer for the tip.

30 thoughts on “The Dogs Bark But the Caravan Moves On”