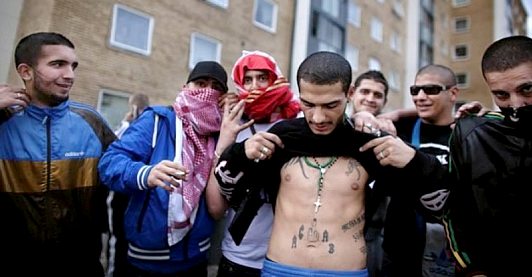 Many thanks to Anton for translating this article from the Swedish police website about weapons and drugs in southern Stockholm. The ethnicity of the suspects isn’t mentioned, naturally, but we can all make an educated guess:

Large cache of weapons and drugs in Skärholmen in southern Stockholm

A larger number of weapons and large amounts of drugs were found in a car in a parking garage in Skärholmen, on the evening of April 8. A preliminary investigation into extremely serious crimes of violence and serious drug offenses has begun, and a man has been arrested.

Police officers with a drug-detection dog conducted a routine drug scan in a large parking garage during the evening of April 8 in connection with a house in Skärholmen. The drug-detection dog clearly marked a car, and after initial investigation, a search was made of the car during which the items were found. The car was seized for further investigation.

In the car they found automatic military weapons intended for use in war. “We also found explosives, hunting weapons, guns, ammunition and kilos of drugs of different sorts,” said Jonas Lindberg, of the serious crime department of the Stockholm South Police, who is leading the investigation in this case.

A man was detained in connection with the seizure and is now also being charged further under suspicion of involvement in large-scale crimes, drug offenses and for violation of the Act on Flammable and Explosive Goods.

“The preliminary investigation has just begun, but at the moment, there are lots of indications that point to a particular criminal network. I cannot tell you more at the moment, but it is extremely positive that we have removed so many weapons and drugs from the street in a sweep. They could have done great harm in the wrong hands,” says Jonas Lindberg.

During 2017, a total of 129 shootings took place in Stockholm County. A targeted effort to break the violence includes, among other things, reducing the number of illegal weapons and removing the hand grenades.

Criminal networks and a battle on drug markets are part of the problem, and therefore also what the police are working against. Work is ongoing throughout the region, and the special event “Max” of the police in the Stockholm region strengthens that work.

And from the Truth Seeker (already in English):

Violent crime in Sweden is soaring. When will politicians act?

January was a particularly violent month in Sweden. A 63-year-old man was killed in Stockholm by a hand grenade lying in the street.

A Dutch exchange student was hit by a stray bullet during an execution-style killing at a pizza restaurant in Uppsala.

In Gothenburg, a hand grenade was thrown into a flat and exploded in the kitchen — the same predominantly immigrant-populated suburb where an eight-year-old British boy was killed in a grenade attack less than two years ago.

In Malmö, a grenade was tossed at a police station and exploded outside. So it has not, so far, been a very happy new year.

19 thoughts on “Swedish Culture-Enrichers: Armed to the Teeth and High as a Kite”