The following report by Egri Nök was published earlier this afternoon at Vlad Tepes in a slightly different form. 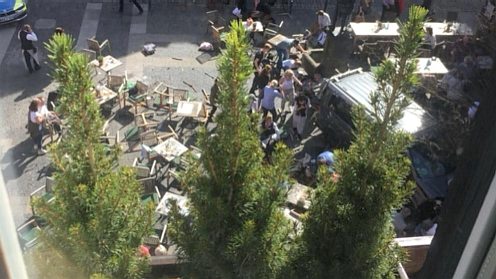 9:45 PM (CET): F.A.Z. who said the perpetrator was 27 years old apologized for their mistake and corrected it to 48 years. An earlier live report on n-tv where journalist Ulrich Klose said that the perpetrator had announced he would commit a spectacular suicide in the public eye remains to be confirmed.

8:40 PM (CET): Currently, there is conflicting information in the German news outlets; the attacker is referred to as “Jens R.”; some outlets say he was 27 years old, others say 48 years old. Some say he has no criminal record, while n-tv cite “unconfirmed reports” that he had a record of mental instability from 2014 on, and was a petty criminal.

8:26PM (CET): North-Rhine Westphalia’s Interior Minister Herbert Reul announces that two people have been killed, and additionally, the perpetrator killed himself. Several are critically wounded. Reul announces the driver of the van was a German, and that there were currently no clues of an Islamist attack.

7:15 PM (CET): According to Bild, the driver’s house is being searched at this moment. Public broadcaster ZDF report that the driver was a German, 48 years old, and had recently attempted suicide.

6:50 PM (CET): as a “suspicious item” was discovered in the van, police are currently evacuating the nearby houses.

Münster, 4:50 PM (CET): A van plowed into a crowd of people who were sitting at the tables at a street cafe. There are conflicting numbers out there. So far there are 3-4 dead, 30 wounded, 6 of them in critical condition reported. The dead driver is still in the vehicle. He allegedly shot himself. The area is in lockdown, the motive still unclear. Police treat it as a terror attack.

This post will be updated as we learn more.