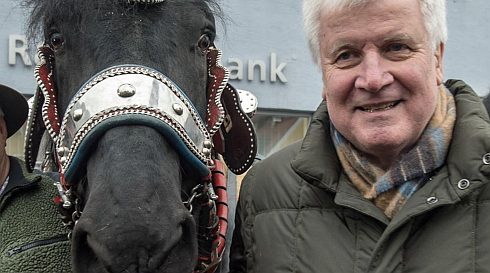 Horst Seehofer is the head of the CSU, the Bavarian sister party of Angela Merkel’s CDU. He became Interior Minister when the new cabinet was formed a few weeks ago. It didn’t take him very long in his new office before he became oppositional with his chancellor.

Many thanks to JLH for translating this essay from the conservative monthly magazine Cicero:

In films, Clint Eastwood shines in the role of the aging avenger with one last task. In the film Unforgiven the old man with the minimalist facial expression allows himself to be hired to punish those in the desert city of Big Whiskey, who cut up a prostitute’s face. In Gran Torino, he plays the haggard, racist Korean War veteran, Walt Kowalski, who begins by calling his new Asian neighbors “slant-eyes,” and ultimately saves them from a black gang.[1]

Seehofer is Out for Revenge

The Clint Eastwood of the new Grand Coalition is Horst Seehofer. He has come to avenge. Not a prostitute or an Asian family. Himself. On Angela Merkel. Barely in office [after the forming of the coalition], he wasted little time before taking two shots at the chancellor with the largest bore firearm possible. He first let it be known that, in his eyes, Islam is not a part of Germany. The statement that Islam is a part of Germany is indissolubly linked to Merkel’s refugee policy. And then, not 48 hours later, he added fuel to the fire by saying that the lack of borders within the Schengen area had to be stopped, to preserve the borders and the interests of the countries within the inner borders. 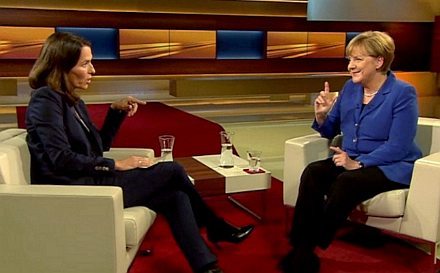 The CSU head had to wait a long time for these months of revenge, for this last ride. Meanwhile, he was eating crow, and during the election acted as if everything between him and Merkel were copacetic. However, as early as during the compromise on immigration between the sister parties CDU and CSU last October, before the sounding out for the Jamaica coalition, it became obvious how furious Seehofer was about the blackout Merkel indulged in during the refugee crisis. There is a time for everything, and it is now here, Merkel announced in biblical and conciliatory tones at the joint press conference. A motionless Seehofer’s only reaction was that — outside of the more or less set 200,000 refugees per year — the most important result for him was that these questions would be decided further in the Bundestag “and not some talk shows.” That was a broadside at the chancellor standing next to him who, during the crucial phase of 2015-2016, showed up twice on “Anne Will” but never once went to the Bundestag with her far-reaching decisions that are today generally seen as the unparalleled tailspin of a German federal government.

Merkel thoroughly refuted Seehofer’s Islam/German statement. That was not a sign of strength, but of weakness. She cannot stop Horst Seehofer’s last ride. He has lost his chief minister post [in CSU/Bavaria] and in turn secured the most important post for his purposes — Minister of the Interior and supreme guardian of the homeland. Merkel cannot simply discharge a CSU minister. Certainly not the still-CSU-chief.

Reactions to Seehofer the Avenger from the CDU camp are completely unanimous. What is decisive is how CSU stands in Bavaria with regard to the local election in October. And since Seehofer’s comment (“Islam is not part of Germany”) attracts far more people to its support than Merkel’s unfortunate, original comment — echoed by the erstwhile Federal President Christian Wulff — that will doubtless help the CSU in the election. By the way, Seehofer’s comments that, in this country, the Christian-Jewish view of humanity is inbred, is nothing more than what Merkel literally has said every year at party conventions.

Avengers — whether an aging and drunken gunslinger or a grotesquely outdated Korean War veteran — who were played by Clint Eastwood in the works of his old age, drew their power vis-à-vis younger and physically superior opponents from two sources: an iron will and having nothing to lose. The aging Horst Seehofer is the most dangerous adversary Angela Merkel has ever had.

Christoph Schwennicke is editor-in-chief of the magazine Cicero.