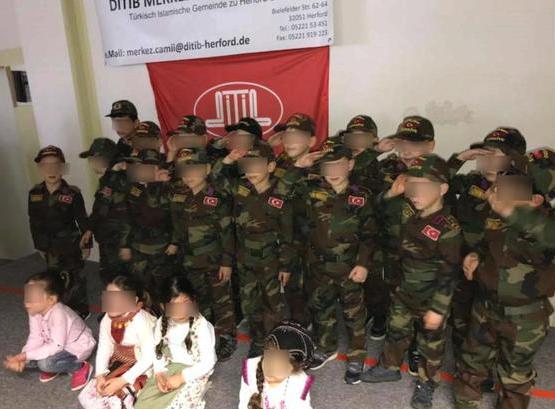 The children of a Turkish mosque Herford in North Rhine-Westphalia are being prepared for the day when they become the overlords of the region, and the German natives are their dhimmi vassals.

Many thanks to Anton for translating this article from TAG24.de:

Herford — A video from the Turkish Ditib mosque in Herford prompts a sensitive discussion on the Internet and also in local politics. Small children appeared as soldiers in a performance in military clothing.

A military performance of toddlers in the Ditib mosque prompts discussion in Herford.

The four- to seven-year-old children marched through the mosque with toy weapons and military uniforms. They shouted loud commands and saluted, reports the Neue Westfälische newspaper. The performance was recorded on video and in photos, which were initially uploaded to Facebook, but have since been deleted.

The performance triggered a controversial discussion in his community, the board member confirmed. He explained that the content referred to a military victory in 1915/16.

At that time, the Battle of Gallipoli took place during the First World War. The Ottoman Empire defended Constantinople (now Istanbul) from conquest by the Allies, including the British, Australian, New Zealand and French armies, some 103 years ago. It was a fierce battle in which half of the soldiers were killed or seriously wounded. The performance supposedly reflects this battle.

The video recording irritated Tim Ostermann, the district chairman of Angela Merkel’s CDU party. He contacted the Ditib community by email, but is still waiting for an answer.

“I find it highly problematic that children are being instrumentalized, which blatantly contradicts any attempt at integration, but is rather a typical sign of a parallel society. State and society must use all means to prevent such a thing,” said the member of the Bundestag from Herford.

VIDEO (original has been deleted)

14 thoughts on “A Turkish Children’s Army in Herford”