The following press release and accompanying info concern an art competition and exhibit that will take place later this year in London. Given that the UK is probably the most thoroughly and blatantly totalitarian country in Western Europe, it’s doubtful whether any truly “edgy” art will ever see the light of day there. Especially any work that deals with the Religion of You-Know-What.

Nevertheless, I urge enterprising artists to go for it. How could the judges resist — just to pick a random hypothetical example — a depiction of Mohammed wearing a Che t-shirt and a pussy hat? 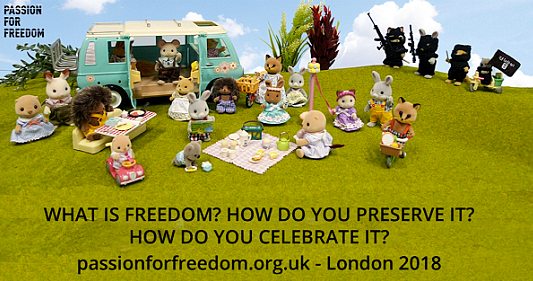 “The festival has a simple mission — which is to display the work of artists who are thinking seriously about freedom, what it means and how you preserve it. Passion for Freedom celebrates the people who not only do it, but who mean it. Go if you can — London’s stunning ‘Passion for Freedom’ exhibition is worth an hour of anyone’s time”

Films, books and journalists featured along with several dozen artworks from all over the world.

The internationally renowned Passion For Freedom art festival will open in London on Monday 1st October at its new home in the Royal Opera Arcade Gallery & La Galleria Pall Mall. The exhibition will showcase uncensored art from the UK, Europe and around the world, promoting human rights, highlighting injustice and celebrating artistic freedom of expression.

The festival asks artists to consider three questions, the Passion For Freedom 3 (PFF3):

Passion For Freedom was started in London by a small group of friends who shared a goal of achieving basic human rights for all and decided to use art as both their weapon and their shield. Predominantly young women, they also sought to highlight the hypocrisy of the West when it comes to the female body.

The organizers focus on controversial and socially sensitive topics, often putting their lives and safety at risk.

Just three years ago (February 14, 2015) Passion For Freedom took part in a conference on freedom of speech, organized by the Lars Vilks Committee (the support organization of Lars Vilks, a Swedish artist and art historian famous for a drawing depicting the prophet Mohammed as a dog), which became the target of an Islamic terrorist. One person died in the shooting, Finn Nørgaard, a Danish filmmaker.

“They not only want to kill us. They want us to stop talking. Therefore, we should continue,” said Agnieszka Kołek, who immediately after the shooting continued the conference.

‘This is the festival’s tenth year and it is going from strength to strength. We exhibit more and more exciting works every time and I expect 2018 to be our greatest year so far. The festival works now as an indicator for the level of freedom on a given continent, nation or even city. At our exhibition you will see what is happening in Venezuela, China, Pakistan, England or Poland and we are succeeding in removing the veil from these places. It seems anyone who limits freedom inevitably faces an artist’s brush or singers verse, tyrants and great artistic movements go hand in hand.

‘As such, we will have to be around a while yet. We will continue our mantra of protecting and strengthening freedom, and our dream of the London festival becoming an annual celebration of freedom. For any official who appears with a list of restrictions, well it is also our task to check whether they still have a sense of humour or pulse. As Picasso said, “No painting is made to decorate apartments, it is an offensive and defensive weapon against the enemy.”‘

For 10 years the festival has shown works from over 600 artists representing 55 countries. This year there will be a collection of films and books, as well as an event about journalism.

Every year there is a Gala Ceremony which closes out the event. Three artists will be nominated for the General Awards and three films will receive our Freedom Film Awards. The audience will vote for their favourite piece of art in the People’s Choice Freedom Award during the Gala Ceremony.

The festival is supported by world-famous artists such as Ai Weiwei, Mehdi-Georges Lahlou and the Iranian director Jafar Panahi. 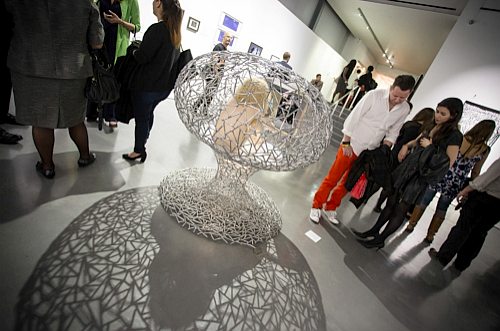 Also to be noted:

31 thoughts on “What Is Freedom? How Do You Preserve It?”