Towards a Swedish Civil War?

On March 3, 2018, the liberal American newspaper The New York Times ran an article titled “Hand Grenades and Gang Violence Rattle Sweden’s Middle Class.”[1] An article with such a title would have been unthinkable a couple of generations ago. However, mass immigration is dramatically transforming Swedish society.

The NYT now admits that gang-related assaults and shootings are becoming more frequent. The number of neighborhoods categorized by the police as “marred by crime, social unrest and insecurity” is rising. In major cities, hospitals report armed confrontations in emergency rooms. School administrators say threats and weapons have become commonplace. The use of hand grenades has become disturbingly common. The police are struggling to gather information in immigrant neighborhoods where gangs intimidate witnesses. “We have lost the trust from the people who lived and worked in this area,” says police superintendent Gunnar Appelgren.

Mr. Appelgren describes an arms race among rival criminal gangs that has become difficult to contain. He fears that the escalating attacks on the Swedish police will soon feature AK-47 Kalashnikov assault rifles and other weapons used in armed conflicts around the world. “I think we’re going to see, if we don’t stop it, more drive-by shootings with Kalashnikovs and hand grenades,” he said. “They throw rocks and bottles at our cars, and they trick us in an ambush. When will it happen that they ambush us with Kalashnikovs? It’s coming.”

The newspaper also interviewed an immigrant from Lebanon, a country that was marred by a bloody civil war not many years ago. He fears that the same thing could happen in Sweden. “Now, when I think of the future, I am afraid,” he says. “I am afraid for Europe.”

It is good that The New York Times has published this article. It describes problems that are very real. However, just a few years earlier, the paper painted a very different picture of the situation in Sweden.

The NYT claimed in January 2015 that it is false that there are no-go-zones in some urban areas in Western Europe dominated by certain immigrant groups. The newspaper highlighted myself, alongside the American writers Steve Emerson and Daniel Pipes, for spreading this alleged falsehood.[2] This was published shortly after Islamic terrorists had massacred the staff of the satirical magazine Charlie Hebdo in Paris.

Fox News issued an unusual on-air apology for allowing its anchors and guests to repeat the suggestion that there are Muslim-only “no-go zones” in European countries such as Britain and France, areas that are not under the effective control of the state and are ruled according to sharia law.

Three years later, the same newspaper indicates that criminal gangs have indeed established de facto control over certain areas in Western Europe. Perhaps they could admit that the writers they have unfairly smeared were right all along. That would probably be too much to ask.

In 2008, the Swedish writer Anders Lugn wrote an article titled “Sweden’s road to disaster.” Somewhat unusually, he even got this text published in the major newspaper Aftonbladet. In the 1980s, Lugn served as a captain in UN-led peacekeeping forces in Lebanon during the Lebanese Civil War between Sunni Muslims, Shia Muslims and Christians. While living there, he asked himself how it was possible for such a wonderful country with so many good people to commit national suicide and self-destruct? Among several reasons for the collapse of Lebanese society he mentions a weak sense of national identity and common values, weak national armed forces, a weak police force, easy access to weapons (legal or illegal) and easy access to drugs. There was also a general sense of powerlessness among average citizens. Lugn is deeply concerned to observe that many of the factors that contributed to a brutal civil war in Lebanon are now also at work in his native Sweden.[3]

Things keep getting worse in the country. The hip-hop artist Ken Ring expects Sweden to descend into a civil war in the next 20 years. He is considering moving to Africa, which he believes will be safer than Sweden. Ring made these comments on the television program Trygdekontoret, which was broadcast on Norway’s state broadcaster NRK on March 13, 2018.[4] This was also reported in English by Breitbart News a few days later.[5]

Ring grew up in the Stockholm suburb of Hässelby. He said that the area has seen a dramatic escalation of violence in recent years. Today there is an open gang war. Violent, organized crime coupled with an increase of drug trafficking had radically transformed the area. When asked about why he would move to Africa, where his mother was from, Ring said: “It’s safer there. My son is nine years old and he asked me, ‘Dad, why is it more dangerous in Hässelby than in Nairobi, Kenya?’” He notes that many of those involved in deadly gang shootings are not recently arrived asylum seekers. Instead, they are second generation immigrants who were born and raised in Sweden. “I think it’s too late — that it’s not possible to change,” Ring stated and added: “Within 20 years we will have an open war on the streets of Stockholm.”

The talk show host and musician Thomas Seltzer stated that there is a “media ghetto” of people who have refused to acknowledge these problems. Moreover, he admitted that many journalists live in a kind of parallel society of their own, cut off from many of these problems. It was frankly admitted during this program that “no-go-zones” where even the police risk being chased away by criminal gangs really do exist in Sweden. They are not a myth. After that, Ring included some words about Swedish racists who object to mass immigration.

Ken Ring has an admitted criminal background. In Stockholm in 1999, he was arrested for performing the song “Spräng regeringen” (“Blow up the government”) in which he rapped about rushing the Royal Palace and raping Princess Madeleine.[6] Despite this, he was treated with greater respect by Norway’s state broadcaster than I am. 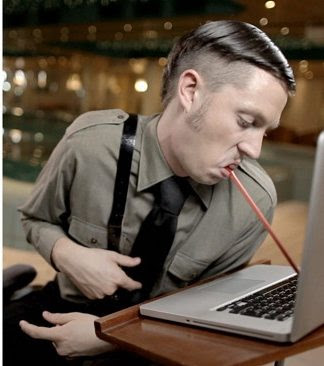 In September 2011, the TV program Trygdekontoret with host Thomas Seltzer showed a parody of me as a Nazi paraplegic in a wheelchair who types his diatribes with a stick held in his mouth. This was shown on NRK, Norway’s equivalent of the BBC in Britain, and the country’s largest and most powerful media organization.[7] NRK has for many years been funded by a mandatory annual license fee payable by anyone who owns a TV. My parents, grandparents, siblings and friends thus had to fund this portrayal of me as a drooling Nazi idiot.

A few weeks earlier, in August 2011, I had been forced to evacuate my small flat in Oslo and flee the country following an aggressive media campaign of public demonization. By the time this portrayal of me was shown on prime-time national television in Norway, I was a homeless person living in involuntary exile from my homeland. All because of crimes I was not involved in, committed by a person I have never once met in my entire life: Anders Behring Breivik.

The Norwegian state broadcaster’s portrayal of me as a “Nazi” was because I write texts warning against the problems caused by Muslim culture and mass immigration. Here is what I wrote in May 2005:

Swedish culture is disappearing with astonishing speed in front of our eyes. If the trend isn’t stopped, the Swedish nation will simply cease to exist in any meaningful way during the first half of this century. The country that gave us Bergman, ABBA and Volvo could become known as the Bosnia of northern Europe. The ‘Swedish model’ will no longer refer to a stable and peaceful state with an advanced economy, but an Eurabian horror story of utopian multiculturalism, Socialist mismanagement and runaway immigration.[8]

In 2018, is it thus considered brave and groundbreaking journalism to warn against the possibility that Sweden could collapse into war. When I warned against the same thing thirteen years earlier, this was considered “Nazism” by the same journalists. Unfortunately, the mainstream media will rarely admit that they were wrong before. They will certainly not apologize to individuals they have unfairly smeared in the past.

The Western ruling elites promote mass immigration and want Europeans to “celebrate diversity.” Yet throughout most of human history, ethnic diversity has been a source of tensions, conflict and often war. When the ethnic mix also includes a significant component of Islamic culture, armed conflict is the norm rather than the exception.

Europe suffered bloody ethnic conflicts in the Balkans in the 1990s, from Bosnia to Kosovo, when the multiethnic state Yugoslavia fell apart. Some people fled from civil war in the Balkans to Western Europe. Ironically, mass immigration is now destabilizing Western Europe and creating a dangerous Balkanization there as well. Some of the hand grenades and other weapons that are currently used to fuel gang wars in Multicultural Sweden come from the failed Multicultural society formerly known as Yugoslavia.[9]

If present trends continue, native Swedes will become a minority in their own country in a few decades. Probably before 2060, but perhaps even before the year 2040. They already are a minority in some urban areas of Sweden today. This population replacement happens even faster among the younger generations. 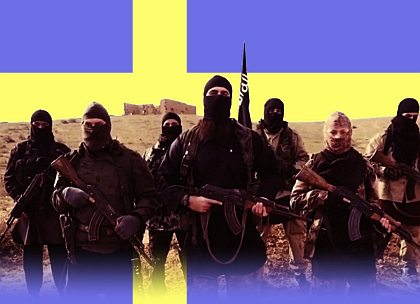 Wars are not waged by 90-year-old women. They are fought by young people, predominately by young men who are willing and able to use violence. Soon, native Swedes will simply be the largest of many different ethnic groups competing for the territory once known as Sweden. They have the advantage of being on their native soil. However, they also suffer from several major disadvantages.

Just like many other Europeans today, young Swedes have little pride in their own culture and nation. What little they know about their own heritage they have been told to dismiss as negative or irrelevant. Defending your own nation and culture is presented as “racist” and evil. Young Swedish men have been taught that any display of traditional masculinity is bad. Muslims, on the other hand, are proud, aggressive and far more willing to use violence to achieve their goals.

Sweden has national elections in September 2018. Some observers believe this could be the last chance Sweden has of resolving its rising tensions peacefully. Pessimists fear that the point of no return was passed years ago.

25 thoughts on “Towards a Swedish Civil War?”