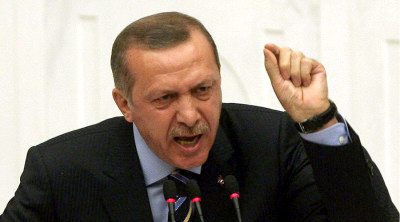 ENF presser
In recent weeks the Turkish military has staged various provocations against its neighbors, in particular Greece and Cyprus. Based on his bellicose actions, Turkish President Recep Tayyip Erdogan seems intent on becoming the Sultan of a revived Ottoman Empire. Not to mention the Caliph of Sunni Islam…

The following press release about Turkish aggression was issued today by Nicolas Bay MEP, co-president of the ENF (Europe of Nations and Freedom) group in the European Parliament.

The Europe of Nations and Freedom group in the European Parliament (ENF) condemns the escalation of border incidents caused by Turkey on land and at sea. After a meeting in Brussels earlier this week between ENF vice-presidents Gerolf Annemans and Marcus Pretzell, and Failos Kranidiotis and Panayiottis Doumas from Nea Dexia (New Right party), the ENF Group condemns the blatant violation of Greece and Cyprus’ sovereign rights by Turkey.

Several serious incidents occurred in less than a month’s time.

On February 9, Turkish warships obstructed a drill rig contracted with by the Italian energy firm ENI from approaching an area to explore for natural gas inside the Republic of Cyprus’s exclusive economic zone. Several subsequent attempts to reach the area were equally obstructed.

On February 12 at around midnight, a Turkish patrol boat deliberately rammed a much lighter Greek coast guard vessel that was anchored off the Greek island of Imia in the Aegean.

On March 2, two Greek soldiers were detained by Turkish forces after allegedly having crossed the border into Turkey in a heavily forested frontier region under bad weather conditions. There are doubts whether this really happened on Turkish territory. There are also serious concerns that the Turkish government wants to use the detained officer and private as a bargaining chip for the extradition of the eight Turkish medical officers who fled to Greece after the coup in July 2016. The Supreme Court of Greece ruled that the Turkish officers would not be extradited. Although this court ruling is final and cannot be reversed, the Turkish government still demands their extradition and proves not to understand fundamental European democratic principles like the separation of powers.

The ENF Group stresses that Turkey does not belong in the European Union. The EU must stop the accession negotiations with that country and must stop all pre-accession payments.