MC’s latest essay is an appropriate follow-up to our recent discussions about neo-totalitarianism.

One hears tell of the unity of the three great monotheistic religions, and maybe that “we all worship the same god”.

Culture is inextricably linked to religion. Even atheists adhere to a religion-based culture that they may have been born into. The socialist religion, however, seeks to destroy culture(s) with the intention of replacing all culture with its own.

So what if we do if we all worship the same ‘god’? It is meaningless when one also supports a socialist mono-culture.

It is the ‘Christian’ way to assume a unity among the three monotheisms and to build bridges, but the Jews do not want any bridges; they are happy with stepping stones. For its part Islam does not believe in two-way bridges, only in a drawbridge and portcullis; Islam is a cultural prison. Mainstream ‘Christianity’ has become totally confused by the socialist political-religion(s) based on the writings of Karl Marx.

There are Christians who still believe in Jesus (a Jew who kept the Torah of Moses), but most believe only in a world of Marx based multicultural diversity where all you need is love (and that I am an object of ‘hate’ because I am a conservative and I live in Israel).

Religious multiculturalism and diversity, however, have a huge problem; the monoculture of Islam does not, cannot and will not integrate. Islam cannot move; it is embedded in a 7th century male-orientated ecstasy in which to change is to fail. But the paradigms of socialism dictate that we are all equal and that all cultures are of equal value, and that Islam must therefore be thrust down everybody’s throat in order to appease the socialist conscience and to prove the verity of the socialist meme.

This particular socialist political religion is creating havoc in Western civilisation. The monoculture of the political-religion, and in particular the maniacal and irrational religious meme of hating all the works of the white Judaeo-Christian male, is taking us back to barbarism. 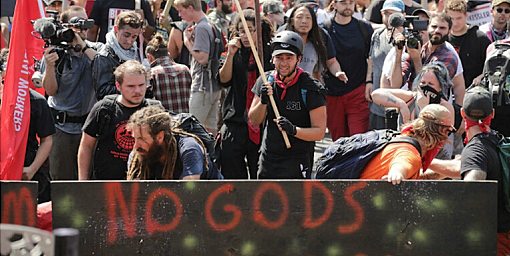 These J-C people “gave peace a chance”, and boy! are they now paying the price.

It was my generation that was wooed by the idea that we could leave behind morality and self-discipline, and that being ‘non-judgmental’ was a virtue, whilst being blind to exactly what a ‘permissive society’ actually meant in the long term. 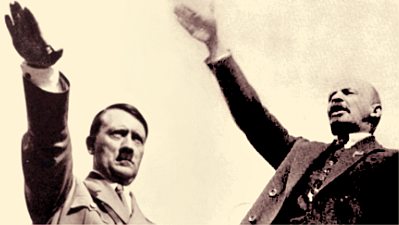 The crooning call of the hate siren was that of Marx-Hitlerism masquerading as a caring and sharing political movement.

Let us briefly look at this. Marx identified ‘class’ as the sole factor in obstructing equality and social justice. This cry was taken up by Marx-Leninists who, having gained power in a coup d’état, proceeded to try and eliminate so-called ‘class enemies’ along with anybody who might appear to oppose this new political religion, and also anybody else who might just have happened to be in the wrong place at the wrong time. In doing so, Lenin, ably succeeded by Stalin, created a shattered country held together by a thick suture of terror.

In Italy Mussolini, an avowed communist, looked at the Marx-Leninist sect of his religion and decided that it was not a ‘class’ problem at all, but was in reality a problem of nationalism and proceeded to unite Italy (at that stage only some 70 years old as a unified state) along the lines of ancient Rome and its glory.

Hitler was a Marxist when he joined the NSDAP (National Socialist German Worker’s Party). He too believed that nationalism was the answer, but that within the nationalism was a magical racial purity, and that there were race enemies, around the hatred of which ‘true’ Germans could unite (again, Germany as a unified state was only about 70 years old).

There is nothing much wrong with nationalism. Nearly all of us are still living in the country of our birth, and maybe of choice. I am an immigrant, but only because I read history books and have seen the writing on the wall.

When the Third Reich was finally defeated, many significant Nazis escaped to lead new lives in the West and the East. It is difficult to gauge their influence, wrapped as it is in conspiracy theory, but there seem to be two sides of ‘Operation Paperclip’: an open side that exploited the skills of German scientists, and a secret side which may have staffed the nascent CIA with German ‘Russian desk’ experts.

Marx-Hitlerism is exceedingly dangerous in that it harnesses the dark side of humanity, holding out carrots to acolytes rather than terror. ‘True’ Germans had nothing to fear from the Nazis, and dissent against Marx-Hitlerism in Germany was minimal.

So Marx-Hitlerism survived the demise of Hitler and the German Nazi Party and became internationalized. But the ‘race’ motive slowly became central, and coalesced upon the enemies of the Third Reich, those in Europe and the US (and Russia to a certain extent) that fought off the demigod Hitler. The white Judeo-Christians became the targeted race group.

In the twenties and thirties the German media machine was the biggest in the world, and it was readily harnessed to the cogs of the nascent Nazi party. Many of the apparatchiks of this subversive institution survived and were absorbed into ministries of information all over the Western world. Neo-Marx-Hitlerism was their creation.

Hitler’s penchant for Islam was well-known. He felt that it was a virile religion that upheld all that was best in manhood. The Nazi doctrine of “Kinder, Küche, Kirche” was very compatible with the similar Islamic code applying to females as chattel ‘owned’ by their families/husbands. The Nazis harnessed the Islamo-Fascism of the Muslim monoculture, and in doing so shaped the future of the Middle East.

So what of the political Left?

Behind the leftist curtain of innocence is a festering pit of layered deceit. It is difficult to ignore the newsreels of the death camps that the Nazis left behind, but who has so documented the squalor of Marxism in all its degenerate forms?

Nazism is generally deplored and demonised, but the now dominant Marx-Hitlerism of the left is strongly camouflaged, hidden in plain sight behind multiple veils of deception, misdirection and obfuscation: Islam, socialism, the DNC, the Southern Poverty Law Center, lawfare, immigration. We can plainly see the Nazism of the Antifa movement and its fellow BLM movement, but the curtain is there to prevent us from seeing the real Marxist-Hitlerist wizard cowering in anonymity, paying the multi-hued front men to take the heat.

If we stop looking into the media-induced fog and allow our cognisance to function, if we ignore the names and look at the actions, then the truth of leftist Marx-Hitlerism becomes immediately apparent.

Race and racism are just not terribly important. What is important is culture. What makes me an Englishman is not my skin colour, but my birthright, a birthright increasingly denied to me by Marx-Hitlerism because I do not adhere to their monoculture of so-called multiculturalism.

Democracy is all about what you do when you lose an election. Democratic people will abide by the wish of the majority, and if they feel that the election was in any way lacking they will allow the legal system to investigate on their behalf. But for those whose political beliefs are a religion unto themselves, to lose an election is blasphemous. The enemy is therefore already condemned by their god(s) and must be brought down by any means possible, irrespective of the expressed will of the people.

Political monocultures, including Islam, exclude dissent, and the Marx-Hitlerist monoculture as expressed by the Left is no exception. There is no room for independent thought in any form of Marxism, and all deviance must be eliminated. The free internet has been a superb tool of liberty, providing its many users with the ability to see all sides of a problem and many alternative opinions, some good, some bad. But Marx-Hitlerism and its ilk have only one opinion, which must be uniquely expressed when required for virtue to be correctly signalled. Any deviation and the ‘criminal’ must be punished and excluded.

The moment we see a name incorporated in an ‘ism’, we know that there is a Left-inspired personality cult in the offing. McCarthyism is supposedly a negative cult (but he was right on all counts), whereas Leninism is noble (even though Lenin was a mass murderer). Hitler’s name is worse than mud, so the Marx-Hitler paradigm must be hidden from view.

Despite the need for the obscuring of the reality, the Marx-Hitler monoculture is able to use ‘multiculturalism’ as a garrote, sneaking up behind its victim; the white Judeo-Christian. The ‘multicultural’ loop is slipped over his head and is now being slowly tightened, so the J-C is choking, and Islam willingly provides modern day Assassins to facilitate this.

The really sad thing, which nobody among the willing spectators and eager predators really understands, is that killing the golden goose may provide a moment of the sweetness of wealth and revenge upon the lips, but is very likely to give a lifetime of gnawing starvation and mindless terror on the hips. Our world is a Judeo-Christian induced civilization, and without the Judeo-Christian influence there is no civilization. Life will just return once more to the barbarism of warlord culture. Islam is a religion of unrestrained violence, and Socialism is a synonym for mass political murder.

You have been warned! 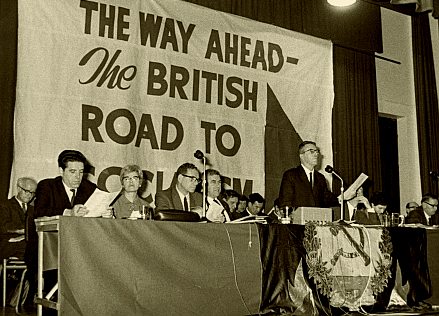 In the England in which I grew up there was no ‘hate’ crime — that had yet to be invented — and the Left were more concerned about the exploitation of the workers than the pursuit of a race-based ideology. I don’t suppose for a moment that the civilized burghers of Berlin actually realized that they were voting in a monster in 1933. But the momentum of the promise of abundant ‘bread and circuses’ was just too much for people to resist. So the Nazi behemoth trundled into the world of dire racial bestiality, with nobody left who was able to pull back on the reins.

Much the same is happening across Europe. The creep of totalitarianism can once more be seen in the land. As in 1930s Germany, the underpinnings of democracy have been abandoned and a form of cudgel-induced political ‘coercionism’ has replaced it.

It is for this reason alone that America must hang on to its Constitution. It must fight to keep it intact, for the slippery slope of revisionism is yawning ahead. It is a pity the seventeen in Florida had to die, but a lot more innocent people will die if US citizens allow meddling with the Constitution. Marx-Hitlerism is a maw of bloody murder.

In the UK it started with enforced seat-belt laws and compulsory crash-helmet laws, followed by ‘Health and Safety at Work’, where I became legally responsible for the actions (and stupidity) of other people around me.

These laws seemed like common sense at the time, but they paved the way for tyranny. Thus my liberty began to corrode. Soon the politically correct modes of dialogue became the compulsory ones, and the language itself became fraught with land mines that could blow up in one’s face.

Then came the exclusions: allow in the jihadis but exclude (or imprison) the ‘populists’, and what next we can only surmise.

So now we watch as that same God that we all used to worship changes His name. Yahweh becomes Allah, the church becomes a mosque and the synagogue is burnt down.

The 20th century was the century of the violent Marxist based tyrants. Is the 21st century to be the century of a resurrected ‘Committee of Public Safety’? Is the Marxist Iron Fist yet again to run amok in a new terror? The concentration camps are already ready and waiting! 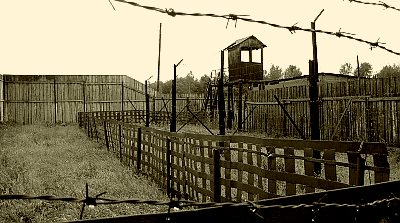 23 thoughts on “The Monoculture”