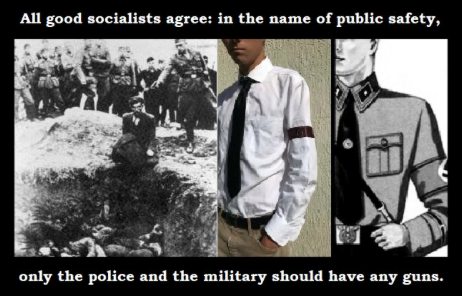 There was a big to-do in the media yesterday about all those marches against guns in cities across the nation. There’s nothing the MSM loves more than photogenic teenagers weeping because American citizens own guns.

Sultan Knish (Daniel Greenfield) asks an important question: “Who runs March for Our Lives?” Read the whole thing, but this is an important part of the answer:

March for Our Lives is funded by Hollywood celebs, it’s led by a Hollywood producer and its finances are routed through an obscure tax firm in the Valley. Its treasurer and secretary are Washington D.C. pros. And a top funder of gun control agendas is also one of its directors.

None of this has much to do with Parkland. The mass shooting by a mentally ill man who should have been committed and arrested long before he carried out his massacre was a political opportunity.

Now that opportunity is being exploited to the hilt by a professional class of political activists.

Gun control activists wring their hands over the NRA. They claim that a special interest lobby is illegitimately thwarting the “will of the people”. Yet it’s the anti-gun groups that are invariably false fronts. It’s very clear who runs the NRA. But the latest fake anti-NRA group is a nebulous shadow. Out front are the high school students and out back are the professional activists.

And who is really behind the whole thing? Hollywood celebs, Bloomberg, a network of organizations?

We know who supports the NRA. You can see NRA stickers on car windows even in the bluest cities in the country. But who really supports the anti-gun political network? You’ll need to spend hours sorting through paperwork, following the trail, comparing addresses and researching names, to even get a hint.

That’s what an illegitimate lobby thwarting the will of the people really looks like.

Hat tip: WRSA. If I’m not mistaken, Matt Bracken made the meme pic at the top of this post.