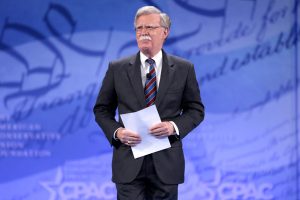 Caroline Glick appears to have a regular gig at Breitbart. Smart of them to feature an outstanding writer.

Here’s part of her essay on John Bolton’s recent appointment [with my emphases —D]:

President Donald Trump’s decision to appoint former UN Ambassador John Bolton to serve as his National Security Advisor is arguably the most significant single step he has taken to date toward implementing his America First foreign policy.

The news hit America’s enemies and competitors — from Pyongyang to Teheran to Moscow to Beijing — like a wall of bricks Thursday night.

Early criticisms on the political right of Bolton’s appointment have centered on two points. First, it is argued that Bolton, who has been involved in U.S. foreign policymaking since the Reagan administration, is a creature of the Washington foreign policy swamp.

While it is true that Bolton is from Washington – or Baltimore, to be precise – and although it is true that he held senior foreign policy positions in both Bush administrations, he has always been a thorn in the side of the establishment rather than a member of that establishment.

For the better part of three decades, Bolton has bravely held positions that fly in the face of the establishment’s innate preference for appeasement. He was a vocal critic, for example, of then-President Bill Clinton’s disastrous nuclear diplomacy with North Korea.

The 1994 “Agreed Framework” that Clinton concluded with Pyongyang was touted as a peaceful resolution of the nuclear crisis with North Korea. In exchange for shuttering – but not destroying — its nuclear installations, North Korea received light water reactors from the U.S. and massive economic relief. As Bolton warned it would, North Korea pocketed the concessions and gifts and continued to develop its nuclear weapons. In other words, far from preventing North Korea from developing nuclear weapons, the Agreed Framework preserved the North Korean nuclear program and enabled the regime to develop it effectively with U.S. assistance.

For his warnings, Bolton has been reviled as a “warmonger” and a “superhawk” by the foreign policy elite, which has gone out of its way to undercut him.

At the time, rumors surfaced that then-Secretary of State Condoleezza Rice had quietly undercut Bolton’s confirmation in private conversations with senators. Those rumors were denied, and Rice publicly supported Bolton’s confirmation. But in 2016, Rice, along with her mentor, former secretary of state James Baker, and her deputy and successor as National Security Advisor, Stephen Hadley, openly opposed President Trump’s intention to appoint Bolton Deputy Secretary of State. At the same time, all three lobbied Trump to appoint outgoing Secretary of State Rex Tillerson.

Bolton was a vocal opponent of Rice’s nuclear diplomacy with North Korea, undertaken after Pyongyang conducted its first nuclear test in 2006. He also opposed Rice’s pursuit of diplomatic ties with Iran through negotiations in Iraq. In both cases, as events showed, Bolton’s criticisms were all in place.

Rice’s nuclear diplomacy with North Korea emboldened the regime and enabled its continued testing of nuclear weapons and development of ballistic missiles.

In Iran’s case, Rice’s negotiations with the Iranians in 2007 and 2008 set the stage for President Barack Obama’s nuclear talks with Tehran, which led to the 2015 nuclear deal. That deal, like the 1994 Agreed Framework with North Korea, preserves, rather than dismantles, Iran’s nuclear program while providing Iran with the financial means to expand its regional power through its terrorist proxies.

On the other hand, Bolton’s actions while in office brought extraordinary benefit to US national security. For instance, as Bush’s undersecretary of state for arms control and international security, in 2003 Bolton conceptualized and launched the Proliferation Security Initiative (PSI). The purpose of the PSI was to empower nations to interdict ships suspected of carrying weapons of mass destruction, delivery systems, and related materials from states and non-state actors of proliferation concern. Originally launched with 11 state members, today the PSI has 105 state members. Its members have interdicted multiple ships suspected of transferring illicit weapons systems to other states and to non-state actors.

Like Trump, Bolton is an opponent of international treaties that bind the U.S. in a manner that may be antithetical to its national interests and prefers bilateral agreements that are tailor-made to defend America’s national interests. Bolton was a firm opponent of the Rome Treaty, which established the International Criminal Court. He worked avidly to vacate America’s signature from the treaty. Due largely to his cogent opposition, the Bush administration decided not to submit the treaty to the Senate for ratification. Bolton concluded 100 bilateral treaties with nations committing them never to present complaints against U.S. military personnel before the tribunal.

Indeed, the level of hostility the foreign policy establishment has directed towards Bolton over the years has been so ferocious, it is a testament to his diplomatic skills, and success, that he has managed to persevere in Washington, in and out of office for forty years.

It is true that Bolton supported the U.S. invasion of Iraq in 2003. But it is also true that he opposed the nation-building strategy that stood at the root of America’s failure to achieve its aims there.

It is also true that like many of the neoconservatives, Bolton is a firm supporter of Israel. However, Bolton is actually far more supportive of Israel than the neoconservatives are. As a nationalist, he supports U.S. allies because he understands that the stronger America’s allies are, the better able they are to defend their interests. Since American allies – particularly Israel – share America’s interests, the more powerful they are, the more secure America’s interests are, and the less the U.S. needs to assert its power abroad. Bolton supported — indeed, urged — Israel to destroy Iran’s nuclear installations during the Obama presidency. Rather than treating Israel as what Rice referred to patronizingly as America’s “special friend,” Bolton views Israel as America’s most powerful ally in the Middle East. He opposes Palestinian statehood and an Israeli withdrawal from the West Bank.

You can read the rest of her essay here, at her own website. You’ll also find her many links, not included in this excerpt.

For additional information on what Bolton’s appointment means for The Swamp, see Conservative Tree House’s post. Sundance, the admin for CTH, often has been prescient regarding Trump’s moves.

On a personal note, both the Baron and I were glad to see John Bolton back on the political stage. As the Baron said, “He’s one of the grownups. I don’t have to agree with everything he says to be confident that he can handle the job.”

Both of us would rather have had him as the new Secretary of State, but that would never get confirmation. The entrenched interests in the Senate would never, ever have agreed to it.