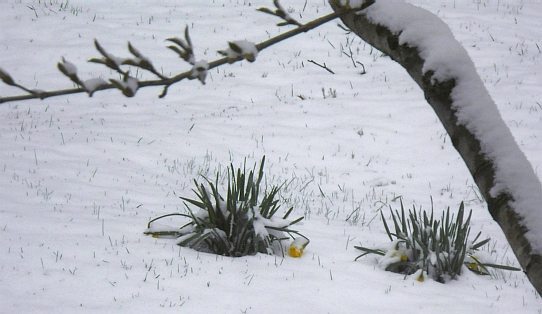 Well, it’s not really a blizzard. But still…

Spring arrived last night, but you wouldn’t have known it by looking out the window this morning here at Schloss Bodissey. We’ve had snow-covered daffodils quite a few times in the past, but not usually so much, nor so late in the season.

It was quite warm at ground level as the snow came down, but the temperature up there in the empyrean was frigid, so the snow was actually dry until it hit the ground. Nevertheless, by lunchtime it was melting rapidly. As I write this it’s still snowing fitfully, but melting faster than it accumulates.

From what I read in the news, people to the north and west of us got it much worse. I read one prediction saying that Garrett County, Maryland might get as much as two feet (60 cm) of the stuff. Ugh!

4 thoughts on “An Equinoctial Blizzard”