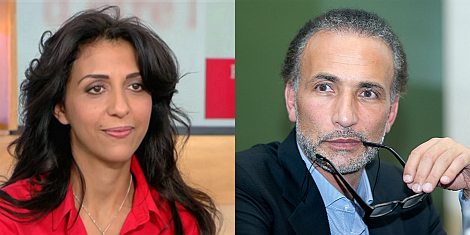 Poor Tariq. His “illness” (a sudden onset of multiple sclerosis) has landed him in the hospital.

Of course, he wouldn’t be hospitalized in the first place if it weren’t a Get-Out-Of-Jail-Free ploy he’s attempting to use in the face of the two rapes of which he stands accused.

The second woman described her incident this way:

“Tariq Ramadan gave me an appointment at the bar of the Hilton Hotel in Lyon, where he had come down for a conference in October 2009,” said the 45-year-old woman in front of the grandson of the founder of the Muslim Brotherhood. At the time, this French convert to Islam had since December 31, 2008 been corresponding with Ramadan, seeking his advice, as many others who follow his writings do.

Their relationship gradually changed, with the latter who was living apart from his wife, promised her a religious marriage and, meanwhile, a temporary marriage via Skype. However, the meeting in Lyon was their first, where Ramadan was attending a conference on “Living together, Islamophobia and Palestine”.

“After 10 minutes, he said to me, ‘We cannot stay here, everyone is watching. I am a well-known person, and the Maghrebian at the reception recognized me and does not stop to look at us’,” she explained in her complaint. Ramadan went to her room by the stairs while she, who walks with a crutch since a car accident, took the elevator.

That would appear to be the Islamic version of foreplay. It gets worse, and for the gentle souls who don’t like ugly stories, stay here on the home page…

…the assault occurred very soon after her entry into the room: slaps to the face, arms, breasts and punches in the belly, oral sex and sodomy imposed by force, new blows, a new rape. “He dragged me by the hair all over the room to get me into the bathtub to urinate on me,” she said in her complaint, claiming to have finally managed to escape only in the morning.

During the testimony, the scholar denied vehemently any rape and even any sexual act, acknowledging a simple flirtation.

The complainant did, however, provide multiple details, including a small scar in her attacker’s groin, which Ramadan admitted to having. At the end of this tense exchange, the Islamic scholar refused to sign the minutes.

Does this sordid scene not echo Slick Willy’s victims, who could identify him by his slightly perpendicular penis?

Ah well, life goes on. Two women accuse Ramadan of rape, and he has sudden-onset multiple sclerosis. Makes sense to me. Right up there with Willy’s solemn declarations that began “I did not have sex with that (_________fill in the blank) woman”.

Meanwhile, the University of Oxford has suggested a temporary leave of absence for this “scholar”…possibly brought on not only by the publicity but also by the ugly fact that Qatar, which funds Ramadan’s position, is “hinting” that he’s persona non grata back at the oasis.

In one of the many reports about this esteemed scholar, it mentions that he is separated from his wife. Quelle surprise! A mid-life crisis for this follower of the caravan robber. What next?

The site having the most information on TR appears to be Al Arabiya. I went to several pages, following the trail, and ending with this one.

Perhaps you’ll find more information. Frankly, after that description of her experience, I know more than I want to about Mr. Frisky. Gets around pretty well for someone with MS, no?

Ramadan was the one from whom I learned the concept of hudna.

After that, I wrote him off as a serious person. Turned out I was right.

10 thoughts on “Taqiyya Ramadan Is Sick”