I am tardy in posting Paul Weston’s response to the by-now infamous take-down of Ms. Newman by Dr. Peterson on Channel Four. The views on what I think of as the “We’re All Lobsters Now, Kathy” “interview” are up to five-and-a-half million by now and I’m sure that’s not the end of it.

Paul sent his response to us right after he posted it on YouTube, and I was quite taken by his own verbal evisceration of the crabby Inquisitor Newman. Nobody does it as well as the English, eh?

But beyond that, Paul’s despair over Britain’s current state was a sentiment I’ve often shared about the overwhelmingly ugly condition of our MSM mafia. [They were out in full force after President Trump’s State of the Union speech. And during his speech, the Democrats sat there like stone gnomes.] 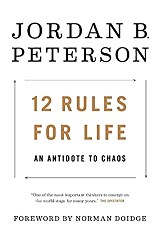 I don’t know the total numbers of books sold, but I’ve little doubt they’re waaay up in that Pareto distribution Dr. Peterson likes to quote.

After the ugly attack against a Canadian professor simply trying to hawk his book, his London publisher arranged an evening’s talk for him. Or perhaps it had already been arranged as part of his publicity tour. But anyone familiar with the Peterson Effect could have told his publicists that one talk wouldn’t be enough. They ended up holding three events, each one successively larger. And they sold his autographed books at all of them. JBP might still be there, had his schedule not required him to move on to the Netherlands.

Below the fold is the third lecture in the London series. As usual, he demonstrates a firm grasp of his subject. He speaks without notes though he admits he can’t always remember the chapter titles for his book, which is why he had his own copy.

This is the place for long videos. We usually limit our videos to a maximum of thirty minutes. This one is about three times that.

Be sure to watch the introduction. That fellow carried off a difficult job with aplomb. I mean would you want to be in his place when the whole audience is waiting for the guy they came to see?

If our readers have their own favorite Peterson videos, by all means post them in the comments. And if anyone remembers the segment in which he describes his young daughter’s severe juvenile rheumatoid arthritis, please leave it for me. That’s an excellent exegesis on suffering, done off-the-cuff.