The following look at the Islamophilia of Prince Charles was sent by David Abbott, the author of Dark Albion. 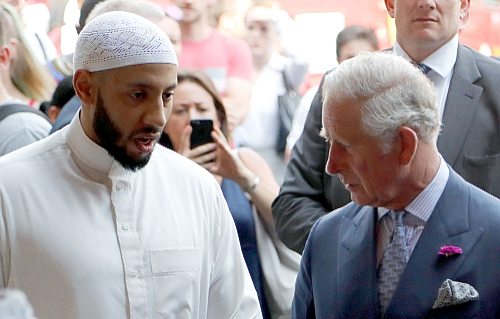 Jihad and the Heir to the British Throne

Prince Charles’s undignified sucking up to Muslims is so extreme it is widely rumoured he is a secret convert to Islam.

The idea of him lugging around a prayer mat and turning to face Mecca five times a day seems incongruous, and the rumours may well be false, but he has made so many speeches endorsing Islam as the solution to the spiritual and cultural ills of Britain and the West that people are naturally suspicious.

In 2001 a beaming Prince Charles opened a London mosque. As he was shown around the prayer hall in the new Al Manaar Mosque in west London he praised the modern building.

This mosque became a breeding ground for Islamic State killers, with two of them, Alexanda Kotey and El Shafee Elsheikh, making the news on February 8 when it was announced they had been captured by Syrian Kurdish forces.

Security experts had long suspected it was a hub for young Muslims subsequently involved in the Syrian war, and on February 8th 2016 the Mirror had revealed that at least nine members of the Islamic State had regularly attended it, including Kotey, Elsheikh, Mohammed Emwazi (‘Jihadi John’) and Aine Davis, who were together called ‘the Beatles’ because of their English accents by the captives they tortured in Syria.

The purpose-built mosque was where Emwazi got to know Kotey, who also went by the name Big Sid from his Islamic name Sidique, and who was probably ‘Ringo’. In the quiet street outside the building Kotey talked openly of suicide bombing. Emwazi, Kotey and Davis had formed a close bond at the Al Manaar Mosque long before their reign of terror began in the IS stronghold of Raqqa, where Emwazi appeared in several gruesome IS videos beheading hostages, including British aid workers David Haines and Alan Henning and US journalist James Foley.

The ‘Beatles’ group kept their hostages in a state of permanent fear, forcing them to fight each other in boxing matches as they watched and then torturing the losers. Their torture techniques included electric shocks from Taser guns, waterboarding and mock executions, including a staged crucifixion. Their ‘execution cell’ beheaded more than 27 Western hostages and at least 18 Syrian soldiers and tortured many more captives.

A Danish hostage, Daniel Rye, who was released in June 2014, recalled in a book published the following year how ‘Ringo’ kicked him 25 times in his ribs on his 25th birthday, telling him it was a gift. In his chilling book, Rye wrote that ‘George’ dominated the group of jailers and was the most violent and unpredictable. Rye also described being taken to an open grave where a suspected spy was shot by Emwazi on the instructions of ‘George’. The scene was filmed by ‘Ringo’. Rye said these terrorists forced him and other hostages to climb into the grave, where they were photographed.

In social media posts Kotey stated he was ‘as British as they come’, adding he was ‘born and raised in Shepherd’s Bush, was a big QPR fan, love a good old fry up in the mornings’.

Emwazi and Kotey had been connected to the ‘London Boys’, a network of Muslims who exchanged essays on Islam while playing five-a-side football. Four ‘London Boys’ were arrested in Africa in 2006 while fighting for al-Shabab. They were picked up by the SAS and then flown home at Foreign Office expense, causing an outcry at the time.

Another jihadist seen regularly praying at Al Manaar before going to Syria was the erstwhile rapper Abdel-Majed Abdel Bary, known as the ‘hip-hop jihadist’. Bary was pictured on Twitter holding a severed head in Syria above the caption ‘Chillin with my other homie, or what’s left of him’. For a while he was thought to be Jihadi John until Emwazi was unmasked. Bary, who had tracks played on BBC radio during his rapping days, once tweeted a picture of the Al Manaar Mosque.

Yet another Al Manaar worshipper was Hamza Parvez, later known as Abu Hamza al-Britani, who left his family without warning to join IS in Syria. His best friend Mohammed Nasser, a former fireman who travelled to Syria with him, also attended the mosque. Nasser died in 2014 when he was hit by a piece of shrapnel between the eyes.

Kotey, a key IS recruiter in west London, recruited brothers Flamur and Fatlam Shakalu. Flamur was killed fighting in March 2015 while Fatlam, known as Abu Musa al-Britani, became a suicide bomber who blew himself up two months later. The engineering student Mohammed el-Araj, who died in Syria in 2013, was also recruited by Kotey at the Al Manaar Mosque.

Prince Charles also aided the building of the infamous Finsbury Park Mosque, which became an al-Qaeda hub, where the hook-handed cleric Abu Hamza recruited and trained terrorists. While the prince was visiting the proposed site, the trustees, realising that he was due to greet King Fahd of Saudi Arabia on a forthcoming state visit to Britain, implored him to float the idea of funding past his guest. When the two men shook hands on the platform at Victoria Station on the king’s arrival, he immediately presented the Finsbury Park scheme. The Saudi ruler quickly approved, and wrote a cheque for £12m to fund a number of mosque-building projects in Britain, starting with the Finsbury Park Mosque.

In January 2003 Detective Constable Stephen Oake became the first victim of the ‘war on terror’ when he was stabbed to death trying to arrest an Algerian named Kamel Bourgass who had been living at this mosque, where Bourgass had plotted to make ricin, cyanide and explosives to carry out terrorist attacks in London. When he was caught, Bourgass was using a complex tried and tested escape route to Morocco for hunted terrorists established by the North African al-Qaeda cell that operated out of the Finsbury Park Mosque. Manchester was the first stage, and he was staying at a house there run by Muslim sympathisers while his associates obtained a false passport and an air ticket, when he was captured purely by chance, severely wounding three other policemen as well as killing DC Oake before being restrained. The North African cell at the Finsbury Park Mosque also ran a fraudulent fundraising ring that raised millions of pounds for mujahideen campaigns in Chechnya, Algeria and Afghanistan.

The Finsbury Park Mosque has also provided sanctuary to many trained and dangerous Muslim fighters from abroad. If they wish to remain in Britain, living outside the mosque, it gives them lectures on how to blend in, including suggesting that they marry a local woman.

All these activities, and many more, are down to the heir to the throne’s procuring the money for the mosque to be built. In setting himself up as a champion of Islam he has a lot to answer for.

44 thoughts on “Jihad and Prince Charles”