Last Sunday the Pakistani human rights activist Asma Jehangir died at the age of 66. Our expatriate English correspondent Peter wrote the following essay in her memory. 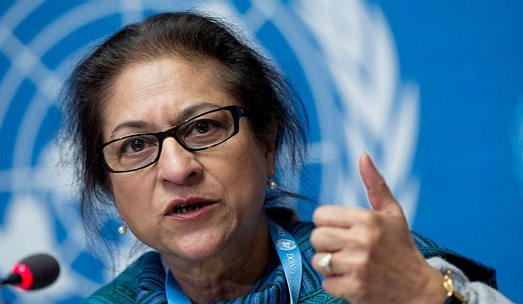 In Memory of Asma Jehangir

Asma Jehangir has passed away at the age of 66 after a heart attack. Love her or hate her — and in her native Pakistan there was no shortage of people who did either — she cannot be forgotten. Her supporters proudly declared that she spoke truth to power, while her detractors accused her of being a traitor and anti-Pakistan. During my various visits to Pakistan I can confirm that it is not difficult to be the latter, although she most certainly was not. She gave a voice to those whose opinions were denied, and was a champion of those who were downtrodden and victims of one military dictatorship after another for half of Pakistan’s existence.

I wrote about her in 1999 for a book I have yet to publish, and at the last minute I deleted the following section, and regret doing so. The publication subsequently stalled, but I retained the segment on Asma Jehangir.

My sentiments are those from 1999. They have not changed.

If evil has been allowed to flourish in Pakistan because ‘good men have done nothing,’ two courageous sisters have chosen to stand up and resist the wholesale injustice that exists in this country, often at no small risk to themselves. Asma Jehangir and Hina Jilani, both well-known lawyers and human rights activists, co-founded AGHS, Pakistan’s first all-woman law firm in Lahore. AGHS has specialised in the pursuit of legal actions on behalf of women and persecuted minorities, a role that has often brought them into conflict with Islamist factions and powerful political interests. In 1991, they set up DASTAK to provide a refuge and legal advice centre for women who had been victims of domestic violence. DASTAK proved to be so successful that by 1996 it had established a board of trustees whose membership included lawyers and civil rights activists such as Abid Hassan Minto, one-time President of the Pakistan Supreme Court Bar Association, Arif Nazami and Saleema Hashmi. Since its inception, DASTAK has provided shelter and legal advice to thousands of women and their children. During the time they are resident at the centre, the children are provided with education while the women are given skills training to enable them to earn a living once it is considered safe enough for them to leave. This is not the only function performed by the refuge. They also try to bring about successful reconciliation between family members, and there have been numerous cases where women have been reconciled with their husbands and have been able to return home.

In 1999 DASTAK came in for a considerable amount of hostile criticism from Islamist elements within the Sharif government, and accusations of immorality were made against its female residents, while Asma and Hina themselves were accused by a number of government agencies of abducting and falsely imprisoning the women. The campaign of criticism and falsehood became so bad that on 26 May 1999 Hina Jilani felt obliged to call a conference at the Lahore Press Club in order to answer her accusers. She confirmed to the press that DASTAK had been the victim of a smear campaign by the Sharif government, various quasi-governmental agencies and the influential families of some of the women who had been given assistance. Hina made it clear that no men had ever been granted access to the shelter to meet women, although the women were free to come and go as they pleased. The names of all residents were regularly registered with the authorities, and the Punjab Social Welfare Department had adopted the DASTAK model and commended it as an example to all other women’s refuges operating within its area.

In a final riposte to her critics, Hina asked them “How is it un-Islamic to help a woman? In fact, those who think like that themselves have un-Islamic thoughts.” Finally, rounding on the Islamists she concluded “Do you think that a woman who is compelled to leave her home should be exploited on roads, or given shelter in organisations like DASTAK?”

At the same time, Asma Jehangir was compelled to deny an accusation from government sources that she had millions of dollars salted away in Swiss bank accounts, and that she deliberately took on cases that were against the country’s interests. She believed the accusations to be part of the same campaign to bring her organisation into disrepute, and she challenged the Government to provide proof of its allegations or risk proceedings being brought against it for defamation. Before this confrontation could be resolved, the Sharif Government was deposed by a military coup.

Asma Jehangir is the Chairperson of the Pakistan Human Rights Commission and currently holds the position of Special Rapporteur to the United Nations on Extra Judicial, Arbitrary and Summary Executions, a role which has angered her opponents, and which, they say, she exploits to defame the Pakistani establishment in the eyes of the international community. In spite of constant death threats from extremists, she is one of the few people brave enough to speak out against the widespread abuse of human rights in Pakistan. It was she who defended young Salamat Masih and John Joseph’s constituent, Ayub Masih, when they were falsely accused of blasphemy. In spite of constant attempts to silence her, she has also been battling to obtain refugee status for couples brave enough to marry of their own free will.

Death threats have become a way of life for both sisters. At dawn on 19 October 1995, eight armed men attacked their family home in Lahore but neither Hina nor Asma was there at the time. The raiders missed Hina by half an hour but they attacked her brother and his wife and tried to abduct them. In the struggle, a gun went off which alerted the house guard. He opened fire on the intruders, who panicked and made off. Police later discovered an abandoned car that had been used by the gang. Inside they found identity cards and a telephone number, which led to the arrest of a man called Abdul Qayyum. When questioned, he admitted his part in the raid. He said that he was a member of a terrorist group, Sunni Tehrik and that the gang had intended to kill Asma, Hina and their families because she had defended Salamat, Mansoor and Rehmat Masih. During that particular case, Asma had also received an anonymous, hand-delivered letter from a man who claimed to have been in court that day and who said that he intended to shoot her. In July 1994, a month after the gun attack that left Mansoor Masih dead and Salamat and Rehmat Masih gravely injured, Asma became the victim of a poster campaign throughout Lahore exhorting Muslims to murder her for her continued defence of Salamat and Rehmat Masih. The message was simple and chilling — Find her and kill her!

Peter is an English expatriate who now lives in Thailand.

3 thoughts on “In Memory of Asma Jehangir”