Update: Based on this drone footage of the burning wreckage of the strip mall, it looks like it was the Chinese restaurant that blew up, rather than the Afghan one. If that’s the case, why were the media so reluctant to publish the exact location or the name of the business? Maybe they knew it was an ethnic explosion, but they weren’t sure which ethnicity was involved, so better safe than sorry… 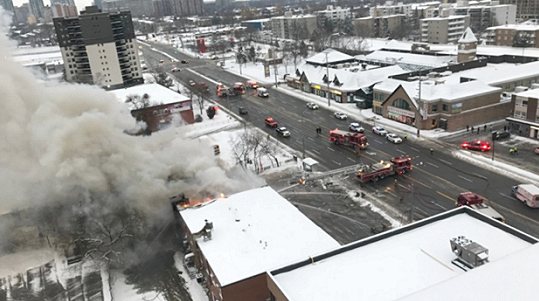 Early this morning a strip mall blew up in Mississauga, a suburb of Toronto. All the news articles about the blast relentlessly avoided mentioning the exact address of the building, or the name of the business that exploded.

That made Vlad and me suspicious, so we spent a half an hour or so on the phone working together to track down the exact location of the fire shown in the aerial photo above. The news articles gave us enough information to work with — the adjacent buildings, the mention of the T.L. Kennedy School, and the fact that Hurontario Street was closed off between Dundas and Hillcrest — so that we could pinpoint the plaza as 3058-3070 Hurontario St., Mississauga, ON L5B 1N7.

My bet is that if the explosion had occurred in a Jamaican or Chinese place, and not the Afghan kebab restaurant, the name and address of the business would have been included in the news reports. But maybe I’m just paranoid.

Here’s what Vlad posted about it — go to his place for more photos and a video:

Major explosion at business in enriched section of Toronto

Here are two MSM stories on the same event. As of 1:47 PM today, Feb. 11 2018, BOTH MSM outlets avoid saying where exactly the explosion took place. It is a stunning example of how media today works to make sure people do not know what takes place.

Two people and one child have been taken to hospital following an explosion at a commercial buiness building in Mississauga Sunday morning.

Police were called to the area of Dundas and Hurontario Streets at 7:30 a.m.

One man has serious, non-life threatening injuries and a woman and child both sustained minor injuries.

All three people have been transported to hospital.

Images tweeted by Peel paramedics show flames and heavy smoke billowing from the business in a strip mall, with debris scattered along Hurontario Street. Five people, including a child, were assessed for injuries.

#PRP in area of Agnes St./Hurontario St #Mississauga for a commercial business explosion. Unknown injuries at this time
Hurontario St closed both directions from Dundas St to Hillcrest Ave.
Please avoid area Updates to Follow
Call came in at 7:28 am pic.twitter.com/iMJFd1oxW

After about 30 minutes working with Baron B. at Gates of Vienna on Google Maps, we think it must be in this strip mall.

Just past the mall you can see a parking lot and the school, T.L. Kennedy, which is mentioned in the articles. 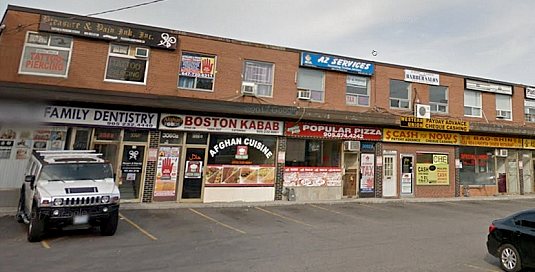 Hey this place looks like a fun place to eat!

The most extensive information on the incident came from CP24 (which is also where the aerial photo came from), but it still doesn’t specify the address where the building blew up:

Three people have been sent to hospital following a massive explosion at a Mississauga plaza that levelled multiple businesses and shattered the windows of an apartment building across the street.

The blast occurred at around 7:30 a.m. at a commercial plaza in the area of Hurontario and Dundas streets.

Crews were able to rescue a man, woman, and child, who were found on the roof of the building. Paramedics say all three were taken to hospital with non-life-threatening injuries.

Two people who were in the south side of the plaza at the time of the explosion were assessed by paramedics on scene but were not taken to hospital.

Mississauga Fire Chief Tim Beckett told reporters Sunday that at least one third of the businesses in the plaza have collapsed as a result of the explosion.

The windows of stores left standing were blown out and Beckett said tenants of an apartment building across the street have been evacuated due to structural concerns.

The plaza is located near Thomas L. Kennedy School Secondary School but it is unclear if the school sustained any damage as a result of the incident.