Below is the teaser for an interview with Hungarian Prime Minister Viktor Orbán in Die Welt am Sonntag: 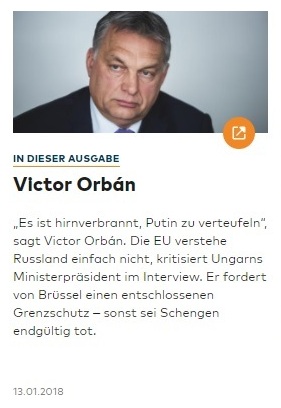 According to Egri Nök, the teaser under the picture says:

“It is silly to demonize Putin,” says Viktor Orbán. The EU simply doesn’t understand Russia, Hungary’s Prime Minister criticizes in the interview. He demands a determined protection of the borders by Brussels — otherwise, Schengen would be irretrievably dead.

Egri says she has to buy the print edition to see the interview, and hopes she will be able to do so later.

3 thoughts on “Viktor Orbán: Protect the Borders, or Schengen is Dead”