An anonymous emailer contacted us about a version of the Koran which has been compiled in reverse chronological order, so that abrogating verses appear before abrogated ones. The abrogated passages are struck through, to make it clear that they no longer apply. There is also a system of color-coding to provide the reader with additional information.

The text of the PDF document is too long and the formatting too complex for it to be converted to HTML. However, I’ve uploaded a copy of it here (1.45MB).

Below are excerpts from the introduction:

The Koran reproduced here was translated by the convert to Islam Muhammad Marmaduke Picthall (b.1875 d. 1936). It was published in 1930, with the title “The Meaning of the Glorious Koran”. It was authorised by Al-Azhar University, Cairo, Egypt. This University is acknowledged to be the foremost in Islamic scholarship in Sunni Islam. 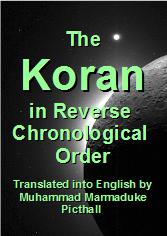 This translation is no longer restricted by copyright, as more than 70 years have passed since the death of the author. Unfortunately the style of English is old-fashioned. There are numerous more recent translations freely available online, which can be read in parallel if a particular verse is unclear. Also, some authors, including Picthall, seek to minimise the full impact of the violent instructions, by somewhat disguising the meaning. For example “Then smite the necks. “ Koran 8:12 rather than the actual meaning, which is to behead the disbelievers: “Therefore strike off their heads…”

Note that there can be discrepancies of verse numbering between translations. If reading another translation it may be necessary to search a few verses before or after the corresponding number, in order to find the same verse.

The concept of Abrogation is the single most important point to understand when attempting to study Islam. Simply stated, it is that the chronologically more recent verses supersede the older verses, wherever contradictions exist. Verses which have been abrogated are shown crossed out, and the abrogating verse number is noted.

The Koran itself describes the principle of abrogation:

Koran 2:106 Nothing of our revelation (even a single verse) do we abrogate or cause be forgotten, but we bring (in place) one better or the like thereof. Knowest thou not that Allah is Able to do all things?

The sura (chapters) in this copy have been arranged in reverse chronological order (i.e. the most recent first). The conventional numbering of the sura has been retained. If you have limited time, then start by reading the most recent sura (110, 9, 5 etc.)

Mohammed’s career started in Mecca. Initially his movement was weak and had few followers. At this time he was more conciliatory towards other religions, particularly Christianity and Judaism. He was attempting to persuade the scholars of those religions that he was a genuine prophet. However they rejected him. He became increasingly unpopular in Mecca, and had to flee to Medina, over 200 miles distant. The Medinan sura became increasingly intolerant, violent, and uncompromising, as his power increased. The citizens of Medina had initially welcomed him into their city in order to act as an intermediary arbiter between competing factions. They soon came to regret this mistake. Intolerance and violence are the features of genuine Islam that we see today. It has superseded the more tolerant Meccan phase.

Today political leaders are desperately trying to avoid any criticism of Islam itself. They repeatedly tell us that the latest terrorist atrocity is nothing to do with Islam, and that it was only a lone individual with mental health problems. Unfortunately for these politicians, such excuses are not credible. Not if you have read the Koran for yourself. Do they not see that being obliged to believe the Koran with its instructions to violence and religious hatred and inhuman attitudes might lead to such mental health problems? Nevertheless a proportion of Jihadis may not be clinically insane. The most straightforward explanation is that they genuinely believe the teachings within the Koran – the teachings to kill nonbelievers.

The verses listed here abrogate one or more other verses. Note that these abrogating verses are generally the most intolerant ones, commanding violence against nonbelievers.

Download the current version (PDF) for the rest of the introduction, and for the entire annotated Koran:

The Koran in Reverse Chronological Order, translated into English by Muhammad Marmaduke Picthall (b.1875 d. 1936), with commentary and annotations by non-Muslims, second edition. To check that you have the latest edition, visit http://blueprintislam.bravesites.com/.

23 thoughts on “Understanding Abrogation: The Koran in Reverse Chronological Order”