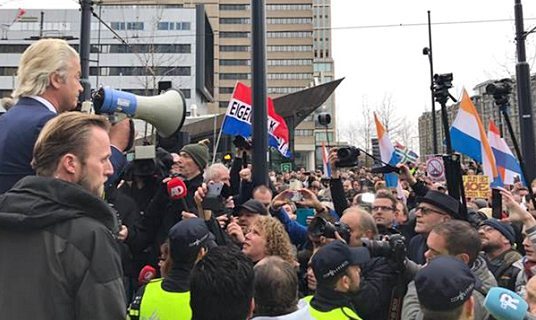 Rotterdam is one of the most Islamized cities in Europe — it’s right up there with Birmingham, Malmö, Marseille, and Berlin.

This afternoon Geert Wilders and the Party for Freedom (Partij voor de Vrijheid, PVV) held an anti-Islamization rally in Rotterdam. Hundreds of PVV supporters marched with Mr. Wilders and listened to him speak.

Representatives of the Flemish separatist party Vlaams Belang were also present for part of the rally. In the photo below you can see Vlaams Belang leader Filip Dewinter holding the banner while marching alongside Geert Wilders: 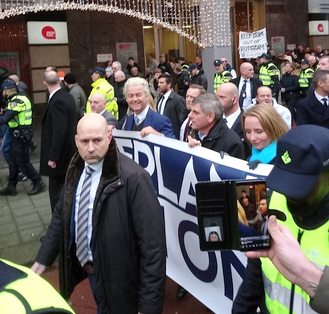 The following video shows brief excerpts from the rally:

The Turkish party Denk (whose name is a bilingual wordplay in Dutch and Turkish, if I understand it correctly) staged a counter-demonstration against the PVV. Police kept the two groups forcibly separated.

Below are excerpts from a report published by Digital Journal:

Hundreds of right-wing demonstrators crowded a main square at Rotterdam’s central station Saturday to protest what they describe as the “discrimination against ordinary Dutch citizens” in favour of immigrants and Muslims.

The protest by around 700 right-wing supporters comes as Dutch political parties gear up for local government elections in March, with issues such as immigration and integration again expected to feature prominently among its 13 million illegible [sic] voters.

“We live here, not in Morocco, we don’t live in Turkey or in Saudi Arabia, but in Rotterdam, in the Netherlands,” said Wilders. 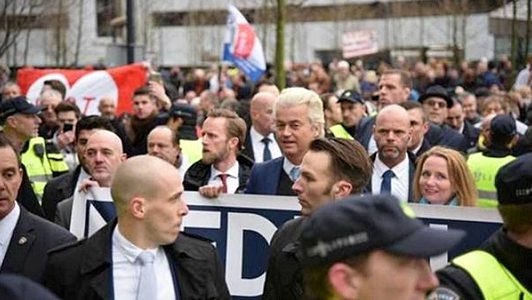 “Here it’s our rules that count. I want to tell you that the Netherlands is not an Islamic country, do you agree?” Wilders said to loud applause, speaking through a megaphone and sporting his trademark peroxide hairdo.

He left the demonstration a short while later after safety concerns when his vehicle became boxed in by a throng of supporters and journalists.

Many protesters on Saturday waved Dutch flags and carried placards saying “Stop the Islamisation of Europe” and “Keep the Dutch culture, traditions, norms and values!”

Police — who were out in force — formed a line between right-wing demonstrators and a handful of anti-demonstrators led by two MPs of the leftist Denk Party, which draws its support mainly from Turkish and Moroccan communities. 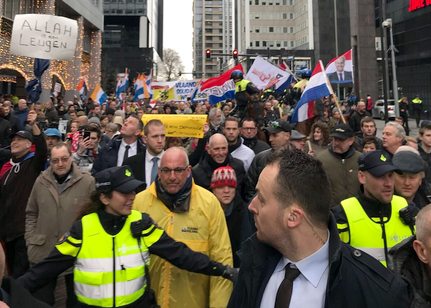 “This (Wilders’ message) is a message of hatred and division and we’re against it. We have a message of unity and solidarity,” Denk leader Tunahan Kuzu told AFP.

Wilders’s PVV will compete in around 30 of the 335 local governments in the March 21 vote, with the party battling to find candidates to represent it in other local constituencies.

The PVV, however, will compete in Rotterdam, where it will face-off against Kuzu’s Denk party, among others.

Other news sources (in Dutch):

7 thoughts on “Geert Wilders and the PVV Rally in Rotterdam”