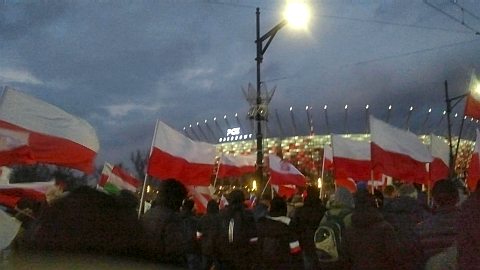 As we reported last month, Polish patriots marched en masse in Warsaw on November 11 to commemorate their National Independence Day. Predictably, the event was billed by most mainstream media outlets as “neo-fascist” or “neo-Nazi”.

Guy Verhofstadt, a Belgian politician and EU apparatchik, repeated the same slander on the floor of the European Parliament. A young Pole named Stefan Tompson responded by recording a video to correct the record, and put it on YouTube.

YouTube went even farther than it usually does when it interferes with politically incorrect opinion: it sent the Polish video to “YouTube Jail”. When a video doesn’t violate any of YouTube’s rules, but is considered politically unacceptable, it is to relegated to a state where it can’t be embedded, can’t be “liked”, won’t pop up as a suggested video on any sidebars, and can’t have its number of views tracked.

I’ve embedded it below, but when you try to play it, you’ll see the notice:

To see the video directly, go here. If YouTube actually takes it down, Vlad has uploaded a BitChute copy.

Everyone should click one of these links, watch the video, and then pass the link on to their friends, to help create a Streisand Effect on this one.

Here’s what Vlad had to say:

This is important. This video is only, and nothing more, than correcting a MSM slander of the good people of Poland.

YouTube has responded to a video showing proof that the MSM and European Union narrative on Poland’s independence day marches is pure anti-nation-state propaganda, by making it almost impossible to find, and no way to interact with it. Please spread it, and please add your thoughts on it under this video, since YouTube decided not to allow it on their platform.