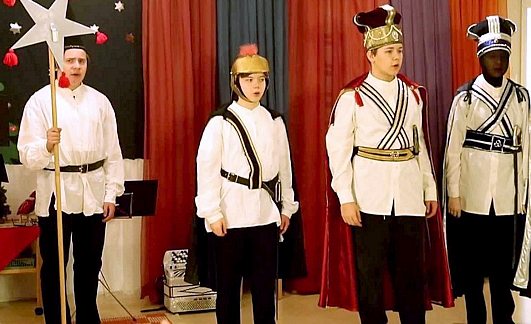 This year’s Christmas in Finland has been sullied by WAYCISTS. At least, that’s the opinion of the state-run broadcaster and a major progressive broadsheet (think: New York Times), because the traditional Christmas play featuring a the Wise Men of the East uses — gasp! — a character in blackface to portray the dark-skinned king.

KGS of Tundra Tabloids has the story:

This is an innocent and endearing traditional Finnish Christmas play, which is why they (Leftists/media) are now attacking it…

I tweeted about it earlier, stating that:

It was only a matter of time that would come under assault, every year I’ve watched the performances in Jysk, wondering when will the nutjobs come after it. Well, now the fake newsrag HS wants to make it an issue, I hope normal Finn’s tell them to stuff it.

It’s simply a play based upon the gospel of Matthew telling of the Wise Men’s journey to honor the newborn child Jesus, and of King Herod, who orders his soldiers to murder all of the young Jewish boys in hopes of getting this newborn.

The state broadcaster YLE’s article on the Christmas play (in Finnish, Tiernapojat). It tries to connect this play, in which a character playing the King of the East (thought to be of dark complexion) darkens his face, with other cultural Christian traditions using ‘black face’.

Most followers of this website already know about Black Pete of the Netherlands, a pixie, or sprite of a character that helps Santa deliver presents to the children for Christmas. That has been regularly attacked by the same forces in the Netherlands (as now here in Finland), annually making its way into the international press. The HS and YLE are now trying to do that with the Tiernapojat.

In Holland, the pains of the local Black Pekka or Zwarte Piet tradition in the local Christmas tradition. In Finland there is still no debate about The Tiernapojat yet.

In that one line, YLE sets up its entire premise behind the story, to cause a commotion over a simple, cute, endearing Christmas play telling a gospel story. No one ever looked at it as ‘racist’, nor should they. YLE then interviews an obscure music teacher, Minja Koskela, and Muslim activist, Marya Abdulkarim to deliver what they think is the ‘coup de grâce’ to the play as a whole:

According to the music teacher, researcher Minja Koskela, Tiernapojat are no longer in school.

— Blackface is a racist practice, it has racist roots, and even if it is not understood as racist, it still is. Period.

According to Marya Abdulkarim, a national activist, blackface mocks the situation and characteristics of the subordinate. It caricatures minority representatives. The tradition is based on abuses of power and oppression, says Abdulkarim.

So who are these people that YLE sought out to diss this traditional play, making them the go-to people on anything? Minja Koskela is a self-proclaimed feminist, teacher, blogger and researcher who wants to end gender roles in school. So she’s a bona fide Leftist kook. Marya Abdulkkarim is a sharia supremacist who is supposedly a female ‘Muslim rights’ activist and insists that Finland is inherently racist. Yet another kook.

I don’t need to dig deeper into the article, which basically has little to say about the Finnish Tiernapojat Christmas tradition (because there’s really nothing negative about it). The brunt of the article focuses on the Dutch tradition of Black Pete. This is simply “guilt by association” when there’s absolutely no case for it. There’s no connection between an ethnic white kid playing the role of a black king, and Black Peter. They’re making something up out of whole cloth for a political agenda, and at the expense of the kids who love rehearsing the lines and acting for audiences during Christmas. Making these kids and the parents who support them into racists is beyond the pale, and racist in itself. This is a gross attack of Finnish culture and its people, plain and simple.

12 thoughts on “We Three Kings of Orient Are… NOT”