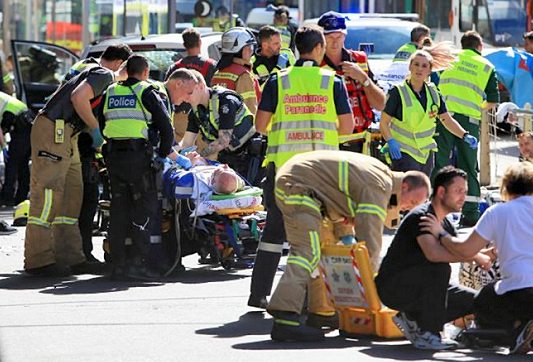 Here we go again. A downtown street in a major city is cordoned off. Police guard the perimeter. Emergency vehicles clot the area, lights flashing. Medical personnel and passers-by huddle over crumpled figures on the pavement.

And the first thing the authorities say? “No connection to terrorism.” 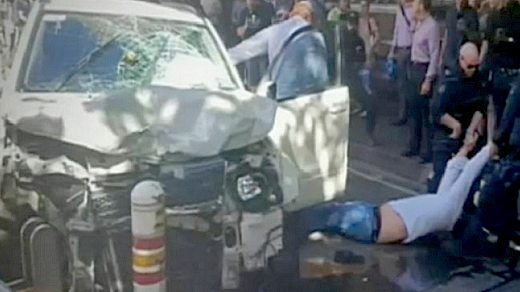 This time it’s in Melbourne CBD (Central Business District), on Flinders Street. Late this afternoon (early this morning our time) a car ran down pedestrians on a crowded sidewalk, wounding 19 people. The accounts emerging after the incident follow the standard playbook: a lone-wolf driver with a history of mental illness who has no connections to terrorism. The second man arrested is just a bystander taking photos who happened to have three knives in a bag. And, yes, both of them are Muslims, but so what? Are you a WAYCIST??

The police have just held a media conference and it turns out this has nothing to do with terrorism. One of the two Muslim guys arrests was just filming the incident and (though found with three knives in his bag) it turns out he was just an innocent bystander.
The attacker was the sole guy in the car, and is a 32-year-old man of Afghan descent who was known to police and has mental health issues. And though it was definitely deliberate, according to police it is not related to terrorism.

He was known to police because he had some minor driving charges and a minor assault arrest or conviction. He has mental health issues because he has used or was being treated for drug addiction. So apparently his deliberate running down of (now) 19 pedestrians was not terror-related.

And from Salome, also in Oz, summarizing the news articles: 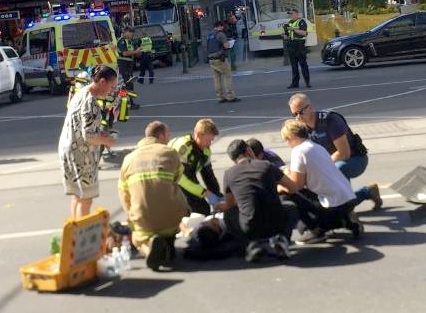 From The Herald Sun:

ICE-addicted Afghan-Australian Saeed Noori has deliberately mowed 17 pedestrians down in the CBD in an “act of evil”.

Noori, who was known to police and was on a mental health plan, roared through the Elizabeth St intersection on Flinders St and slammed into innocent shoppers, workers and tourists.

After his Suzuki SUV smashed into a tram stop bollard an off-duty cop — hailed on Thursday night as a hero — dragged Noori out of the vehicle.

Sources said he had missed a medical appointment earlier in the day.

“He is still in custody, under arrest for what we allege is a deliberate act,” Mr Patton said.

Pedestrians aged four to 83 needed hospital treatment after the horrifying rampage at one of Melbourne’s busiest intersections, with four critically injured.

The four-year-old, a boy, suffered a serious head injury but was said to be in a stable condition in the Royal Children’s Hospital on Thursday night.

The off-duty police sergeant suffered an injured shoulder as he fought Noori after the white Suzuki slammed into victims at 4.41pm. The critical incident response team then swarmed the SUV.

One witness said the driver, dressed in blue jeans and a white T-shirt, appeared to be unconscious when he was dragged from the vehicle.

“They (police) were knocking him … trying to wake him up. He got pulled out from the passenger (side of car).

“He was pulled out of the car with a gun at his chest, like the big one (large gun) … they dragged him out … he looked unconscious.”…

A second man dressed in a flannelette shirt and blue jeans, who was seen filming the attack on his mobile phone and had knives in his bag was arrested at the scene, but was not believed to be related to Noori.

Australian resident Noori, of Afghan descent, was on Thursday night under armed guard in hospital.

Police said he was known to authorities, with a history of drug use and mental health problems. He was expected to be questioned by detectives on Friday morning.

The man allegedly behind the wheel of the vehicle that ploughed into pedestrians in Melbourne’s CBD has been identified.

The incident unfolded on Flinders Street shortly after 4.30pm as a white 4WD mowed down pedestrians, injuring 19, with four critical including a four-year-old boy and an 83-year-old man.

Victoria Police identified the driver as a 32-year-old Australian citizen of Afghan descent. Police confirmed he was the sole person in the car.

He was previously known to police with a history of drug use and assault matters.

The 32-year-old also has a history of mental health issues and police believe he has been receiving treatment for his mental illness.

He is one of the 19 hospitalised and is in a stable condition, remaining under police guard.

Another male, aged 24, who police believe was not related to the incident, was also arrested at the scene.

According to police, he was seen filming the incident with his mobile phone and was in possession of a bag containing three knives.

Fifteen people are in a stable condition in hospital and four are in a critical condition.

31 thoughts on “Vehicular Jihad in Melbourne”