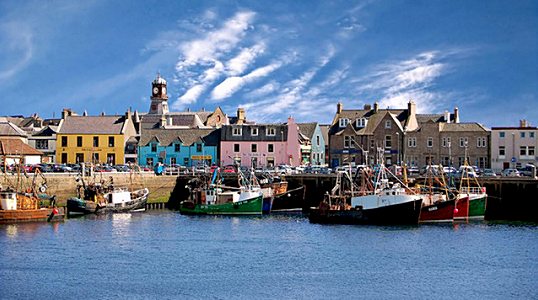 On Saturday we posted about the resettlement of “Syrian” “refugees” on the Isle of Lewis in the Outer Hebrides. A local resident named Alistair took us to task in the comments for our Islamophobia:

That article is [not one with which I agree]. As a resident of the Isle of Lewis, let me educate you…

There have been Muslim families living here for 70 years, they are fully integrated into island life. To wait so long for a place of worship is what the real disgrace is.

After hundreds of years of de-population I welcome incomers to our island. We actually need more people and have plenty of vacant run-down houses which could be turned into safe, homely environments for people fleeing from war.

Ossian, our correspondent from the Isle of Lewis who sent the original report, wondered if this Alistair might in fact be the local MP for the Na h-Eileanan an Iar constituency. However, the islands’ MP in the UK Parliament is Angus MacNeil. The same constituency is represented by Alasdair Allan in the Scottish Parliament. So unless Mr. Allan deliberately misspelled his Christian name, it isn’t the same person.

To counter Alistair’s bland assertions, I asked Ossian for more information about the Islamization of the Hebrides. He sent this follow-up report today:

I did some research on DuckDuckGo and it’s apparently a bit worse than I thought, with families going to the Isle of Bute and the Orkneys.

The search was done using this phrase: “isle of lewis syrian families”. Here are the links; all were on the first page of the search results:

In this last link it is said the building used to be a sort of annex to the church that you can just see behind the building. Interesting the way it is referred to as an ex-storehouse. No mention anywhere of its being former Church land. I do wonder if the ex-church behind will be their real future mosque.

I have yet to talk to anyone living here who has anything positive to say about this recent influx. Both locals and incomers.

Also, this is a good one, the Wee Free’s up in arms…

From the website of the Free Church of Scotland (Continuing) [emphasis added]:

(On 31st August the Western Isles Council approved a planning application for the creation of a mosque in Stornoway. Following this decision the Presbytery of the Outer Hebrides issued a press release in which they indicated their concerns regarding this development. The text of the press release is below.)

Last Thursday the Comhairle granted planning permission for the setting-up of a mosque in the centre of Stornoway. The Free Church of Scotland (Continuing) Presbytery of the Outer Hebrides regard this as a most unwelcome development. Having made a representation on the matter to the Council prior to the determination of the application, we now wish to state publicly the reasons why we object to the creation of a mosque in Stornoway.

Our main concern is with the religion of Islam itself. If a mosque ever opens, Islam will be able to promote itself in our midst through public worship, despite its beliefs and practices being alien to the religious convictions of the vast majority of our community. Islam is wholly inconsistent with the teaching of the Word of God in Holy Scripture, which is the only rule to direct us. It is opposed to the Christian religion as confessed by the Church historically since apostolic times, and as established by law in our land since the Reformation.

Fundamentally, Islam utterly denies the divine Person and redeeming work of our blessed Lord and Saviour Jesus Christ, who died on the cross to satisfy the justice of God, that He might grant forgiveness to sinners. Since Islam has no Saviour, it offers no hope to guilty and hell-deserving sinners, for we cannot save ourselves by our own works. The Bible declares that, having paid the price for the sins of His people, Christ rose triumphantly from the dead, ascended bodily to heaven, and is now seated at God’s right hand. From there He will return to this world at the end of time as the infallible Judge of us all.

Islam is also incompatible with, and indeed a threat to, our religious and civil liberties, as is very evident from the situation which prevails in those countries where it dominates. The oppression of Christians and the reduced status of women under Islam are well-known, as is the willingness of some of its followers to spread its influence by violent means.

It is a sobering fact that in recent years many militant Islamists or ‘jihadists’ have entered European countries under the guise of being refugees and migrants, when their real intention has been to wage war on the West on behalf of their religion; we are witnessing the tragic results of this deception in the form of regular acts of carnage, including in the UK. We have also seen young men born and brought up in our own country who have been radicalised in mosques and have turned against the society which has hosted them.

We stress that we have nothing against individual Muslims, least of all any who have been forced to flee their homelands because of persecution and suffering. Our desire and prayer for those who have made their way to Scotland and other parts of the UK is that they would hear the gospel of Christ and find the way of salvation, coming to know the love, grace and forgiveness of God.

Finally, we urge the Lord’s people to make this situation a matter of earnest prayer, asking the Almighty that in His kindness He will grant that no mosque will ever appear in Stornoway. Man may propose, but God always disposes. Above and beyond this particular issue, we need to plead with the Lord that in His mercy He would enable us to turn from our sinful and foolish course as a nation, and return to Him. Let us take our confidence from the Bible, which says, “Is any thing too hard for the Lord?” (Genesis 18:14).

27 thoughts on “The Cultural Enrichment of the Western Isles”