Our Israeli correspondent MC sends this report from the front line in Sderot on the “Palestinian” response to Donald Trump’s announced plan to move the U.S. embassy to Jerusalem. 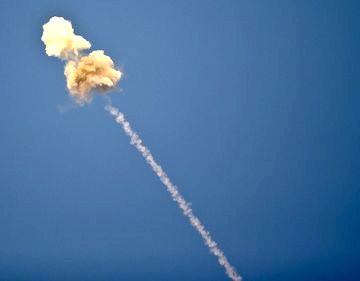 It is 10:30pm, and the Religion of Peace is once more showering us with its (explosive) blessings.

They are prepared to kill and maim Jews because an American Christian confirmed that Israel’s capital city for the last 3,000 years is still its capital city. As an Israeli politician put it to the BBC: Jerusalem was the capital of Israel before London was even thought of.

Jews have been continuously in the land for thousands of years, and Jerusalem has always been their capital. Many have tried to throw them out, they have all failed. The history is freely available.

We had one alarm yesterday evening. Two rockets were fired but did not reach Israel. Tonight at 18:12 we had an Iron Dome intercept very close by (the Iron Dome is very noisy, and this one had a particularly short burn, which means it was close).

Then just as I was taking a friend home at around 10pm I was caught outside as the alarm went off again, and this time we heard the detonation. It apparently landed in Sderot and damaged some cars.

In between times we have had the various bangs and wallops as the IDF responded in kind. It makes for a noisy night.

I have still yet to hear the howls of rage from Europe’s politicians who appear to believe that all Israeli Jooooz must be punished for the actions of an American Christian. It would appear that the sun shines so brightly out of the Islamic [fundament], as it spews its wroth upon the innocent, that all that the Merkelistas wish to do is take the money and run. Peace in our time (if only we kowtow enough and forget the war crimes).

Sorry; I am a bit out of kilter tonight. I am just so fed up with those smarmy gits whose parentage is in dispute.