Below is the prepared text for Mr. Wilders’ speech. I haven’t seen a video of the speech yet, but we’ll post it when it becomes available. 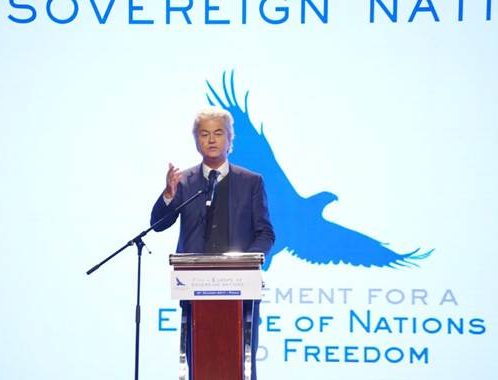 Speech by Geert Wilders at the ENF Congress

Dear friends, I am very happy to be here in Prague, one of the most beautiful cities in Europe.
Thank you Tomio Okamura and the SPD for inviting me.

Your huge election victory last October here in the Czech Republic encouraged us all.

I am especially honored to have been asked to address so many Czech patriots here this evening.

Let me tell you a little secret: The Czechs are one of my favorite people in Europe.
You are a nation of heroes!

Just think of Jan Komensky, the great philosopher who also lived in the Netherlands. He was a great European, but wherever he went, he kept writing in Czech and remained a Czech above all.
Let us never forget his great lesson: Only by remaining what we are, we can be true Europeans!

When I think of the Czechs, I also think of Thomas Masaryk, the liberator of your land, your very own George Washington.

He mocked our so-called intellectual elites, who are eager to change the world, but too arrogant to see the wisdom in traditions and conservative values.

When I think of the Czechs, I think of Jan Palach, hero of the Prague Spring of 1968.
Jan Palach refused to live under a totalitarian dictatorship.

Rather than live under the yoke of totalitarianism, he preferred to die for freedom.
In this legacy we stand! All of us!

Palach made the word “Czech” into a synonym of bravery.
He is not dead, his spirit lives on! We will never betray it!

We, too, we want to live in freedom and remain who we are.

My party wants to take the Netherlands out of the EU. Our motto is Nexit!

And we are not afraid to state very clear: The EU is a monster! We want a future without it!

Of course, individual countries can cooperate bilaterally or even multilaterally if they consider this to be in their benefit.

But we reject all supranationalism. Because it undermines our national sovereignty, our national identity, our democracy and liberty, our values.

It wants to distribute these immigrants all over the EU member states. The result will be a disaster.

It will dilute the Judeo-Christian and humanist identity of our nations.

The Czech Republic and the other Visegrad countries reject this evil EU plan.
They — you — defend Europe and its civilization.

And we support you in your brave resistance against the EU!

Because, like you, we want to remain what we are: Free, independent, sovereign!
Proud nations with a Judeo-Christian and humanist civilization.
Forever free, forever civilized.

My friends,
Together, we must oppose the cosmopolitan elites.
Because these elites do not represent the people and are selling out the nation-state.

Together, we must oppose Islamic totalitarianism.
Because our civilization is not Islamic.
It is rooted in the legacy of Jerusalem, Athens and Rome! And not, never, Mecca!

Brussels is suing you. The cosmopolitan elites are suing the Czech Republic, Poland and Hungary because they want your country to be Islamized in the same way as Western Europe.

That is a scandal! But you are not alone!
I stand with you.
All our friends here stand with you.
We want the same thing as you:
We want to remain the masters of our own house.
Together, we symbolize the flame of freedom that cannot be extinguished.
Here we stand, united in the fight for freedom! We are the vanguard of the new Europe!

You do not want in the Czech Republic what happens in Western Europe today.

What happens there is terrible. New figures about the growing Muslim population in the EU have just been published by the renowned Pew Center.

Unless there are radical changes to the present policies towards immigration, over 30% of Sweden will be Islamic by the middle of this century, and almost 20% in Germany and France.
You are right not to want that here.

We in Western Europe have made a terrible mistake. In the past four decades, we have allowed in millions of immigrants, many of them from Islamic countries.
And though not all immigrants are to blame, mass immigration had led to a disaster:
Crime has increased, violence against women has multiplied, anti-Semitism has risen, terror attacks have happened everywhere.

You do not want that here! You say: No! Never! Ne! Nikdy!

You do not want Sharia neighborhoods where Czechs no longer feel safe! We do not want mosques, imams, halal food, inequality of men and women, we do not want barbaric Islamic sharia law in our land.

Islam is not a religion but a totalitarian ideology.
If you leave Islam you will be killed. Islam wants to dominate our society and is as an ideology unable and unwilling to assimilate. Islam means domination and violence and terror towards Christians, Jews, women, apostates and actually everybody who is not Islamic. Islamic sharia law and freedom are 100% incompatible. Nowhere in the world, in not one country where Islam is dominant, there is freedom.

So my proposal is: no more.
No more violence, no more hate, no more terror and no more Islam. If you like Islam and want more mosques or imams or halal food and if you want to live under full sharia law you may have it. But not here, than you better move to Saudi Arabia or Iran. Not here. This is our country. Do you agree with me?

In the past, the Czechs played an important role in protecting Europe against Islam.

It was your king, Ludvik, King of Bohemia and Hungary, who fell fighting the Ottomans at Mohacs.
Bohemians were also prominently present at the siege of Vienna.
You were a bulwark of the West against the Ottomans. And we in the West owe our freedom to you!

And today you once again resist both the EU asylum policy and the Islamization of Europe. And I tell you this: Thank you my Czech friends, thank you Visegrad countries! Your resistance inspires us!

Unfortunately, if nothing happens, worse is still to come.

The African population is bound to grow from its present 1 billion to 4 billion by the end of the century. One third of the Africans want to move abroad and many want to come to Europe

But our answer is clear: No! Never! Ne! Nikdy!

Therefore, our countries must adopt a totally new strategy.

We must have the courage to repatriate illegal immigrants. And the courage to de-Islamize and be unwelcoming to the ideology of Islam.
Instead of being soft, Europe must be tough.

There is no other alternative. If we fail, we will cease to exist.
If we do not have the courage to do the things I just mentioned, we will perish.
Because we are facing an existential crisis.

My friends, the big conflict of our age, the big confrontation ahead of us, is the conflict between globalism and patriotism, between supra-nationalism and identity.

And in this conflict, “Freedom” is our slogan! Svoboda!!

In the spirit of our national heroes we will defend the high castle of freedom and democracy.

And we will win!
Because we are the patriots!

Together, we are the wind of change that will shake the old order!
And restore Europe to the Europeans!!

16 thoughts on “Geert Wilders: “We in Western Europe Have Made a Terrible Mistake””