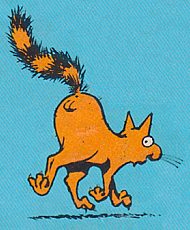 We had a Gilbert Shelton week for our quarterly fundraiser, which means we covered the “humor” topic pretty well — there are a lot of laughs in the Fabulous Furry Freak Brothers and Fat Freddy’s Cat.

I wonder what we’ll do next quarter — maybe contact Robin Williams or Jonathan Winters via the Ouija board? Jeff Foxworthy videos on YouTube?

Anyway, here’s the complete list of places, as of late evening on Monday:

Many thanks to everybody who chipped in. We’ll see y’all again in the early spring — probably when the daffodils are blooming (at least here in Central Virginia).