Some mischievous young Afghani lads took up shovels and rakes and implements of destruction and did some serious damage to their living quarters in the German town of Falkenfels. OK, so those weren’t really the weapons used, but still…

You’ll notice in the second photo below that the top of a pressure cooker is clear visible on the kitchen counter. How thoughtful of the immigration authorities to provide vocational training materials for those high-spirited youths! I wonder if the “reworked Crisis and Protection Concept” will include a brand-new pressure cooker, and maybe a subscription to Inspire magazine…?

Build a bomb in the kitchen of your Mutti!

The following report by Egri Nök was posted earlier tonight at Vlad Tepes in a slightly different form. 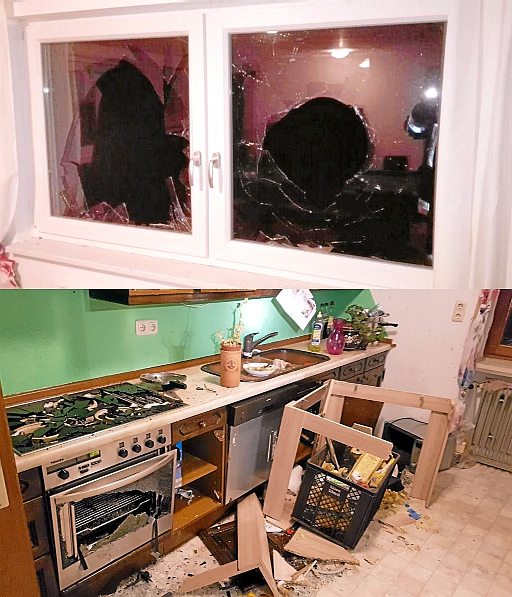 Germany — Unhappy with being placed in a small town, four Afghan refugees vandalized their accommodation with chains and wood laths. They then smashed the windshield of the arriving police car and fled into the nearby forest. There a large police contingent was able to arrest the youths. The affected accommodation is a therapeutic living group for traumatized underage refugees. It remains uninhabitable for the time being.

An original translation from Straubinger Wochenblatt:

FALKENFELS — After four residents vandalized an accommodation for unaccompanied underage refugees in the district Hirschberg of Falkenfels (Wochenblatt reported), a crisis summit was held. County Commissioner Josef Laumer and representatives of the accommodation contractor, of police, of the municipality, of the office for youth and foreigners, and of the government of Lower Bavaria’s supervision for accommodations, discussed the current situation and determined the line of approach for the future.

In the meantime, the County Commissioner and the Member of Parliament Alois Rainer and Mayor Ludwig Ettl visited the scene.

“This must be prevented by all means in the future, and must not happen again”, said Laumer. “People in the village don’t feel safe anymore. But it is our job to be there for the people in our region. The protection of the public has utmost priority for me. Therefore I pressed for the three main culprits not to return here. Not to reward them, but out of consideration for the locals’ fears and concerns. Besides, there are many points where we hope for help from Berlin.”

The rioters are four youths (15, 16) from Afghanistan. Three leaders of the gang won’t return to Hirschberg, the administrative district office announced. Besides, there will be a reworked “Crisis and Protection Concept”. Among others, the maximum occupancy in the institution will be six persons. At the time of the riot, seven youths were accommodated there, who had been sent from different youth welfare offices in Bavaria. The accommodation is designed for traumatized and psychologically conspicuous young people, and is the sole therapeutic institution for underage refugees in Lower Bavaria.

While police had initially estimated the property damage inside and on the building, and at the police car, with €20,000, the manager now quantified the damage as roughly €3,000. Wochenblatt have obtained further photo material from the havoc inside the accommodation, which remains uninhabitable. It remains open as to whether the institution will open in Hirschberg again, after the damage is fixed. The operating society announced to relocate the accommodation, as soon as “a suitable location is found elsewhere,” the County Commissioner said.

24 thoughts on ““Youths” in Falkenfels Trash Their Asylum Accommodation”