This follow-up by Egri Nök on the notorious Berlin police was posted earlier at Vlad Tepes in a slightly different form. 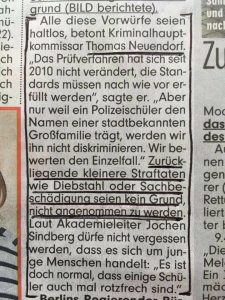 Berlin’s Future Cops: Burglars, and “Insolent as S**t” at Times

Berlin — Finally, there is reassurance in the Berlin Police Academy scandal, where a leaked voice message lamenting intolerable conditions due to a migrant student rate of 36% surfaced.

All of the allegations were unfounded, Detective Chief Superintendent Thomas Neuendorf points out […] “ Just because a police trainee is from a city-wide notorious clan doesn’t mean we will discriminate against him. We evaluate the individual case.” Small criminal offenses in the past, such as theft or damage of property, were no reason not to be accepted. According to Academy Chief Jochen Sindberg, we shouldn’t forget that these are young people. “It is all too normal that some pupils will be insolent as s**t at times”

Now, that is reassuring!

11 thoughts on “Those Insolent Berlin Cops”