Today is the hundredth anniversary of a crucial event in the history of the State of Israel. Our Israeli correspondent MC explains the day’s significance. 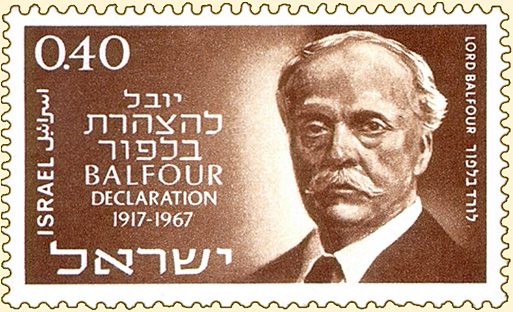 The Centenary of an Idea

Today is my 66th birthday, but it is also the hundredth birthday of an idea that eventually gave birth to modern Israel, like it or not.

The last half of the 19th century gave rise to a profound spirituality in Europe and the Americas, a spirituality with its foundation in Bible prophecy and the idea that the Jews would return to their promised land.

But there were other currents flowing through the institutions of Europe, the ideas of evolution and the justification of Atheism and Humanism and also of sheer Nihilism, of Hedonism.

It was amongst these flows that the War Cabinet sat in London and considered the long-term solution to the Jewish Problem.

It just so happened that all of the cabinet except one were what would now be described as fundamentalist Christians. That one exception was a Jew.

This cabinet issued what came to be known as the Balfour declaration, as statement of intent by the British Government to create a Jewish Homeland in Southern Syria, now Israel.

Looking out of the historical window, that cabinet would have been aware of the Bolshevik coup d’état taking place in Russia with the potential of removing the eastern ally; a stalemate on the Western Front where the Battle of Third Ypres was ending in bloody, muddy carnage; and a static war on every front. Yet they sat down and thrashed out a policy about the return of Jews to their historic homeland.

General Allenby and his Army were positioned before Gaza, ready for their third encounter with the Turks in the area, the first two having followed the usual pattern of trench warfare and frontal assaults where the attackers were repulsed with horrendous casualty lists — the usual WW1 bloodbaths.

But the new commander was wily. He feinted towards Gaza, but attacked Beersheva, some twenty miles to the east. His cavalry came in on the flanks and took the ancient city and its precious wells. The first breakthrough of the axis ring of steel.

All this was happening on the 31st of October 1917. But the British cabinet was discussing Balfour’s proposal for a Jewish homeland.

The Balfour declaration was a statement of intent by His Majesty’s Government that the Jews could/would return to their land, fulfilling the ancient prophecies in the scriptures, and thus solve the problems of the Czarist pogroms in Russia and implications of the absurd Dreyfus Affair in France. However, the carefully worded document contained a trap: the idea of the Jewish homeland being created without prejudice to the civil and religious rights of the other ethnic groups is quite straightforward to an English lawmaker; it means that only Jews would have political rights but that there would be freedom of worship and a common civil/criminal law.

The one person who might have seen through this was not in the cabinet of that time. Winston Churchill was in the political doldrums, having carried the can for the failed Gallipoli campaign.

As we now know, Muslims see no difference between religious rights and political rights. Thus the peculiar phrasing of the declaration opened the door to the wolf and a strife that continues to this day.

The legal phrase ‘without prejudice’ is a way of establishing a secondary objective, but emphasising that it in no way interferes with the primary objective, so in actuality, whilst the document is very clear to a British Christian lawmaker, it established in the mind of the Muslim that his ‘political rights’ were and are sacrosanct, and that his political right to the land is established along with his religious rights.

Thus was created somewhat unintentionally a political minefield that lasts to this day. Many people believe in the Palestinian ‘cause’; they want to believe, because they cannot understand what happened in London a hundred years ago, when a group of British Christian gentlemen tried their hardest to solve the Jewish problem by re-establish the ancient kingdom of their shared God Yahovah…

27 thoughts on “The Centenary of an Idea”