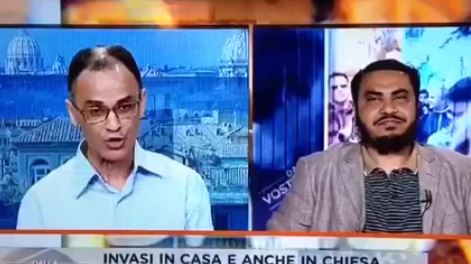 Striscia la Notizia is a satirical Italian television program that has aired continuously since 1988. Rajae Bezzaz is an Italian actress and TV personality who was born in Morocco and came to Italy as a small child. Ms. Bezzaz recently became a presenter on Striscia la Notizia.

Magdi Allam is an Egyptian apostate from Islam who now lives in Italy and is a member of the European Parliament. Mr. Allam converted to Roman Catholicism; he was baptized during the Vatican’s 2008 Easter Vigil service in St. Peter’s Basilica presided over by Pope Benedict XVI. (See his speech at the 2012 Brussels conference.)

The following article by Magdi Allam describes the exposure of a fraudulent imam, Sharif Lorenzini, by Rajae Bezzaz and Striscia la Notizia. Sheikh Lorenzini had passed himself off as an Iraqi when he was actually an Egyptian, and entered Italy as a “minor” when he was really already an adult. (Now where have we heard that before?)

The Lying Imam Mocks the State But Not Striscia la Notizia

I congratulate Rajae Bezzaz of Striscia la Notizia, not only because she confirms the uselessness of the Order of Journalists, but because she has managed to put the lie to the so-called “Bari imam” Sharif Lorenzini.

Having received the original birth certificate, Rajae proved that Sharif lied to the Italian authorities on his arrival in Italy in 1993, declaring false identifying details. He falsified his date of birth, making himself pass for a minor when he was already an adult. He said he was born in Tikrit, Iraq while he was born in Alexandria, Egypt. He presented himself as an Iraqi citizen when he was an Egyptian citizen.

When Rajae showed him his birth certificate and asked him if the names of his parents were correct, Sharif answered embarrassed, “I must confess that I am ignorant. I must verify, I don’t remember well, I lack the dates, I don’t even remember the most simple data.” But Sharif was contradicted by his younger brother, Mohamed, who has resided in Milan for 16 years, and with whom Sharif denied being in contact. “It seems very strange to me because up to a year and a half ago, we associated with each other.”

At the moment, it adds up to crimes of false identity, substituting a (name) and illegal entry. Formally, they are prescribed offenses, but what remains is the substance of the complaint. Because we find ourselves confronted with a public person who purports to (carry out) a series of religious duties, who has been accredited as a religious authority within the religious institution and the institutions of the State, presenting himself as “imam of Bari, president of the Islamic Community of Italy, and vice president of the Islamic Community of Puglia”.

Just as he boasts of a prestigious series of entrepreneurial duties, being president of Halal International Authority, an administrative delegate for Sinterivet Srl, a society that works in the sector of innovative systems for the recycling and recovery of glass and solid waste, ex-president of the administrative counsel of CCIB, a society that handles international consulting and procurement, he has occupied roles of responsibility in multi-nationals such as Anas SpA, Proctor and Gamble, American Express, Alegna Marconi. On the academic level, Sharif, who presents himself as “professor” and “engineer”, boasts a laureate of engineering in industrial production obtained from Turin Polytechnic, a laureate obtained from the School of Business of Brighton University, a specialized laureate at International Business Development and Management. Last year Sharif was assigned by the state attorney of Bari to re-educate an Albanian boy who had been praising ISIS, imparting to him a course in Islamic religion. In anticipation now that the state attorney will shed light on the true identity of Sharif, I hope that the Church and the institutions of the state will refrain from engaging in relationships with a dubious person.

Additional notes from the translator:

The reporter interviewed the imam, and on one occasion when she approached him in his car, he called police to try and shoo her away (that is from the videos).

Apparently, the writer of the above article in Il Giornale received some sort of death threat from the imam in September.

According to an article in La Gazzetta del Mezzogiorno, in a Friday sermon Imam Lorenzini used words that the writer (an Islam critic) felt was a fatwa against him, Matteo Salvini and others.

6 thoughts on “Exposing the Lying Imam of Bari”