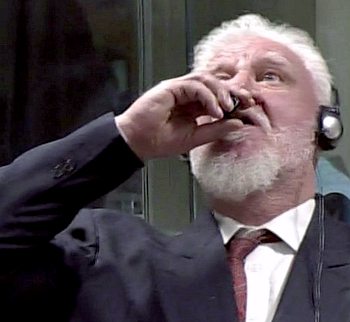 A Bosnian Croat named Slobodan Praljak, a general during the Balkan civil wars of the 1990s, committed suicide today in The Hague. Gen. Praljak’s suicide was very public: he drank poison during a hearing at the International Criminal Tribunal for the former Yugoslavia, just after a judge rejected his final appeal.

Gen. Praljak was 72 years old and was facing twenty years in prison. Many convicted defendants do all they can to save themselves so they can live out the rest of their lives in prison, but the general was evidently not cut from that sort of cloth. After drinking the poison, before he was carried out of the courtroom by EMTs, he said, “I am not a war criminal. I oppose this conviction.”

A note to readers, before you jump all over me about this: I’m not saying that Gen. Praljak was an innocent lamb who did not deserve the sentence handed down. Nor am I saying he was a depraved psychopath who deserved what he got, and more. I’m not qualified to evaluate such matters, so that’s not what I’m doing.

My interest is in the political nature of the ICTY, which I consider a kangaroo court. But before we get into that, here’s the report from Australian ABC:

The wartime commander of Bosnian Croat forces, Slobodan Praljak, has died after he drank poison seconds after UN judges turned down his appeal against a 20-year sentence for war crimes against Bosnian Muslims, Croatian state television reports.

Sources close to Mr Praljak told Croatia’s state TV he died in a hospital in The Hague.

Dutch police will not comment on the TV report based on “sources close to General Praljak”.

Spokesman for the tribunal Nenad Golcevski, when asked if he could confirm the death, said: “I have no information to share at this point”.

Mr Praljak, 72, tilted back his head and took a swing from a bottle shortly after appeals judges confirmed his sentence for involvement in a campaign to drive Muslims out of a would-be Bosnian Croat ministate in Bosnia in the early 1990s.

“I just drank poison,” he said.

“I am not a war criminal. I oppose this conviction.”

Presiding Judge Carmel Agius had overturned some of Mr Praljak’s convictions but left his sentence unchanged.

Judge Agius quickly halted the hearing at the International Criminal Tribunal for the former Yugoslavia.

Dutch police, an ambulance and a fire truck quickly arrived outside the court’s headquarters and emergency service workers, some of them wearing helmets and with oxygen tanks on their backs, went into the court.

The ICTY is about to close its doors after 24 years of dispensing international “justice” at The Hague. During that time it has handed down 161 indictments. Gen. Praljak provided a fitting finale for the court that will most likely color future historical accounts of its proceedings.

The civil wars in the former Yugoslavia were by and large a three-way affair: Serbs vs. Croats vs. Muslims (Bosniaks and Kosovars). Therefore one might expect the indictments to break down into roughly a third for each group.

But they don’t. So what’s the reason for that? Why are Muslims under-represented in the court’s cases? Are Serbs and Croats simply that much more bestial and depraved than the Bosniaks and the Kosovars?

Or was the ICTY simply carrying out a political agenda?

My money’s on the latter. Saudi money was (and is) very prominent in the Balkans on behalf of Bosnians and ethnic Albanians. That money has a long reach in other places, too. Carefully targeted amounts earmarked for various groups and individuals working the international “justice” scam could do wonders to direct the indictments.

Based on the historical evidence from the Balkans, there is no reason to suspect that Bosniaks and Kosovars are any less bestial than their Serb and Croat neighbors. If reports are to be believed, the Kosovars are the most bestial of all. So the light presence of Muslims in the dock and in the prisons is significant.

Also: You’ll notice that some of those convicted Muslims got out early, after three years or so, for the same types of crimes that sent Serbs and Croats to prison for twenty years. I don’t have time to evaluate the early-release patterns for the non-Muslims, but the complete data are available below for those who wish to crunch the numbers.

Here’s the full table of indictments and convictions. See the wiki page for footnotes and links to more information. Muslim defendants and the disposition of their cases are bolded in red: