Asylum seekers in Germany were kept busy this past weekend burning down their digs. The following report was filed by Egri Nök at Vlad Tepes in a slightly different form: 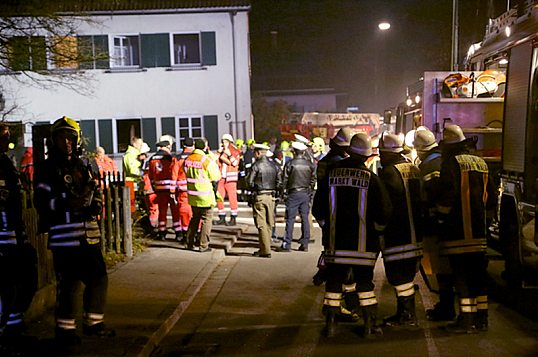 Germany: THREE Refugee Accommodations Torched This Weekend! By Nazis? No…

…by their own occupants.

This weekend, refugee hostels in North Rhine Westphalia, Mecklenburg-Vorpommern and Bavaria were burning. There are no indications that the acts of arson were committed from the outside.

At the fire in the refugee accommodation in Rüthen (North Rhine Westphalia) in the night between Saturday and Sunday, about 20 people suffered light smoke poisoning. Paramedics treated them on-site in the early hours of Sunday.

An occupant of the accommodation was arrested as the suspect. The 22-year-old Moroccan is suspected of having started the fire in his room. The man was inebriated, it was announced. Criminal Police began investigations.

Early Sunday morning, a fire also broke out in the fitness room of a refugee accommodation in Jürgenstorf (Mecklenburg-Vorpommern). A foam mattress went up in flames. Smoke spread through the whole building. Firemen evacuated all 120 occupants. No one was injured; the damage is minor.

The police rule out that the fire was set by outsiders; they are investigating it as grave arson.

Late on Friday evening a room caught fire in a refugee accommodation in Ettringen (Bavaria). One occupant was injured. He suffered a minor smoke poisoning, police announced. When the fire broke out on Friday evening there were 18 people in the building. Many of the occupants were only lightly dressed, and were provided blankets by the rescuers.

The accommodation will not be inhabitable for the near future, it was announced. It was still unclear how the fire broke out.

20 thoughts on “Bonfire Night at the Asylum Home”