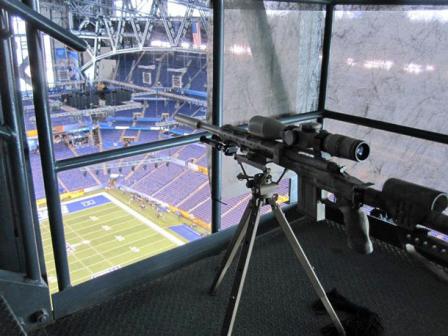 Is the NFL ready for a stadium attack on a Las Vegas scale?

My first novel, Enemies Foreign and Domestic, published in 2003, begins with a sniper shooting into a packed football stadium. Ninety bullets are fired from long range into an upper deck, precipitating a stadium-wide panic stampede that results in over a thousand deaths. In the book, a combat veteran holding a semi-automatic rifle is quickly located by a SWAT counter-sniper in a helicopter, after a citizen’s tip is phoned to the police. However, the veteran is just a patsy, and the true perpetrators of the massacre are a pair of mid-level federal law enforcement agents who are seeking to increase their departmental budgets and overall bureaucratic power. The liberal mainstream media accept the false narrative without close examination. Right-leaning military veteran “gun nuts” are universally tarred as potential mass murderers. Within a week, semi-automatic so-called “assault rifles” are banned. The first chapter can be read here.

My goal with the plot of Enemies Foreign and Domestic was to encourage news consumers not to blindly accept convenient official explanations after traumatic national events. Since the release of this novel, we have, in fact, seen federal agents and bureaucrats at a much higher level than my two fictional villains conspire to commit mass murder with the intention of spinning a false news narrative. We know this intentional mass murder plot as “Operation Fast and Furious”, whereby thousands of semi-automatic rifles from Southwestern gun dealers were deliberately sold to criminals with the expectation that they would be transported to violent cartels in Mexico. This resulted in mass carnage which would then be blamed on the Second Amendment and lax American gun laws. Honest gun dealers were coerced by the ATF into making otherwise illegal straw purchases to criminals in bulk quantities. No attempt was made to track the guns once they left ATF observation at the point of sale. The Mexican government was never informed of the murderous gun-running plan. Operation Fast and Furious was not a legitimate law enforcement operation gone wrong. It was a covert murder plan from start to finish, conceived and carried out for political purposes.

Before the evil scheme was exposed after the shooting death of Border Patrol Agent Brian Terry in 2010, President Obama, Attorney General Holder, and Secretary of State Clinton were regularly touting as fact the lie that 90% of the guns found at Mexican murder scenes had originated in the USA. Eric Holder was found in contempt of Congress after stonewalling their attempts to investigate Operation Fast and Furious, when the half-hearted investigation was leading directly to his office. None of the principals behind this murderous plan have ever been held accountable. I revisit Fast and Furious in case any readers of this article learn the premise of my first novel and declare that federal law enforcement officials would never be involved in a mass murder scheme concocted for political ends.

That Rubicon was already crossed with Operation Fast and Furious.

Since then, we have witnessed other scandals which involved selling the American public a false narrative. One example is the lie that the deadly attacks on our nearly undefended diplomatic missions in Benghazi were the result of an angry local response to an obscure video about the life of Mohammed. My point in recounting this history is to encourage Americans to always search beyond the “official narrative,” which, as we have seen, can sometimes be manufactured from whole cloth for public consumption. If the false narrative coincides with the liberal mainstream media’s underlying biases and preconceptions, you can be certain that very little honest journalism will be done to expose the lies and reveal the truth to the public.

This brings me to Las Vegas, with its ever-changing timelines and other dark mysteries, such as the motive of Stephen Paddock, the presumed shooter. Columnist Mark Steyn proposes a theory of the case that, in the absence of any declared motive or connections to international terrorism, “the medium is the message.” In Las Vegas, then, the message would be that the ready availability of semi-automatic firearms constitutes a menace to American society, and the Second Amendment must be curtailed to prevent future massacres. Limiting the right of Americans to keep and bear arms has been a long-standing goal of the Left. So-called progressives well understand that their dream of imposing a “socialist utopia” cannot be achieved while Americans possess sufficiently effective weapons to mount a furious armed resistance. If Paddock had left a note declaring this end to be his true motive, he would have discredited his own purpose.

Of course, Paddock might have simply been a deranged psychopath, bent, for his own twisted reasons, upon topping the record books as America’s most successful mass shooter. We’ll never know because he’s conveniently dead and, apparently, he left no departing message. The lack of a declared motive, the ever-shifting timeline, and the fact that it took more than an hour after the shooting had ceased for the police to enter Paddock’s suite means that mystery may cloud the Las Vegas Massacre for years or decades to come.

One outcome is certain: millions of Americans are unlikely to accept any “official narrative” released after the investigation has concluded, and with good reason. The FBI and other federal law enforcement and intelligence agencies have squandered their reputations for honesty and integrity in recent years, and we can no longer assume that politics and corruption have not trumped even-handed truth telling.

This brings me to the NFL. In 2017, we are in a season of national discord, with American politics more radically polarized than since the 1960s, or perhaps even the years before the Civil War. The Las Vegas Massacre has shown us that billion-dollar corporations like MGM, as well as the Las Vegas police, were woefully unprepared to deal with a sniper standing in the window of a hotel overlooking an open-air concert.

Should we assume that the NFL is any better prepared to deal with a stadium sniper similar to the one described in the first chapter of my first novel?

Bear in mind that my fictional sniper was not perched high up in a stadium light tower, or hidden in the stands, but was located in a separate building three-quarters of a mile away. His rifle was aimed just over the near side of the stadium, dropping plunging fire into the opposite upper deck. Perimeter security measures taken to prevent firearms from being smuggled into a stadium will do nothing to hinder a distant sniper using this area-fire tactic. In my novel, a SWAT counter-sniper in a helicopter is able to kill the patsy left holding the rifle, but only after the shooting had ceased. But do NFL stadiums have police helicopters with counter-snipers standing by, ready to protect the fans who are packed in like sardines? And not only at the Super Bowl, but at each of the dozen or so weekly NFL games played in uncovered stadiums, or the hundreds of college games?

Greatly increasing the likelihood of a long-range sniper attack on a stadium is the fact that the distant sniper will have a good chance of getting clean away. In my first novel, three rifle magazines, ninety rounds, are enough to precipitate a panic stampede that kills over a thousand fans. If the distant shooter escapes, he can easily leave false clues at the scene, blaming his ideological enemies for the massacre. The Left can blame the Right, or black can blame white, or vice versa. Current events demonstrate that many, if not most, purported “hate crimes,” such as painted swastikas and nooses left at colleges, have been false-flag operations done to discredit the political enemies of the left-wing hoaxers.

Imagine the national outrage after a stadium massacre if overtly racist anti-black hate literature is found among the expended brass shells in the sniper’s lair, calling the mostly-white victims “race-traitors” for attending the NFL game in the wake of ongoing anthem-kneeling protests. The resulting social explosion would make the aftermath of the Las Vegas Massacre seem like a church picnic by comparison. This prospect must certainly be tempting to malefactors bent upon driving the United States toward civil war and anarchy. And, of course, an Islamic terrorist would need no reason beyond spreading terror among the infidels.

At an absolute minimum, large open air concerts and stadium events need a police helicopter with counter-snipers ready to launch on a moment’s notice. Acoustic gunshot detection systems must be installed around these venues to immediately locate a distant sniper’s location. Vectored to the area by the acoustic system, the helicopter’s onboard FLIR can rapidly find the sniper, and the airborne police counter-snipers can finish the job. Stopping a sniper after just a few minutes is a far better outcome than allowing him ten or more minutes of uninterrupted carnage, as in Las Vegas. Bear in mind that Paddock ceased shooting for his own reasons. The police did not stop him.

All the necessary elements (SWAT, counter-snipers, and police choppers) are typically already located in close proximity to these outdoor events. These elements need to be staged together, ready to fly, and able to detect gunshot locations as well as the FLIR signatures of open or broken-out windows in line-of-sight buildings, muzzle flashes, and humans hiding in unoccupied structures. The fatal fiasco of Desert One in 1980 largely resulted from a lack of coordination and practice between the disparate elements of the ad-hoc Iranian hostage rescue mission. In the aftermath, the U.S. military created the Joint Special Operations Command. Similarly, American law enforcement needs to rethink and revamp its approach to providing security for large outdoor events before a predictable tragedy occurs.

In addition, fans attending stadium and other large outdoor public events must be repetitively instructed to avoid blindly attempting to flee in the event of an emergency. Airline pre-flight safety instructions can be used as a model. In Las Vegas, most of the non-fatal injuries resulted from trampling, not from bullets.

A final note: in this article I chose a method of attack (indirect plunging fire from long range) that is simple, but would not be easy to pull off without considerable thought, planning, and practice. There are other tactics that I chose not to describe that would be equally as devastating, but would be much easier for an average maniac to employ. Law enforcement needs to think out of the box, and anticipate novel forms of attack.

They failed in Las Vegas.

Let’s hope they will not fail in the event of a stadium attack.

19 thoughts on “Matt Bracken: Is the NFL ready for a stadium attack on a Las Vegas scale?”