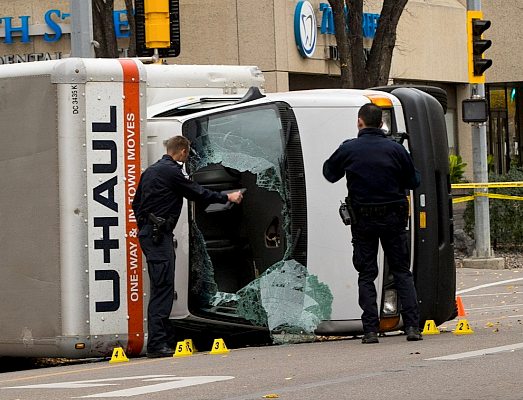 One wouldn’t think of Western Canada as a hotbed of jihad, but the larger cities in Alberta enjoy considerable cultural enrichment. Last night in Edmonton a mujahid ran down a policeman on the street, then got out of his vehicle and stabbed him.

Very few of the initial news reports mentioned the fact that a flag for the Islamic State was seen in the suspect’s car. The first clip below, however, talks about the flag. Many thanks to Vlad Tepes for uploading these videos:

The second clip shows a CCTV view of the ramming attack and stabbing of the policeman. WARNING: Although there are no graphic details or gore in this video, sensitive viewers may want to skip it:

This CNBC report doesn’t mention the ISIS flag, and it came out before the perp’s name was released:

The first attack where a police officer was run over and stabbed by an attacker occurred near the Commonwealth football stadium in Edmonton, Alberta, Canada.

A man was arrested on Sunday in connection with two “terror” attacks in Canada which saw a several pedestrians hit with a vehicle, and a police officer stabbed in Edmonton, officials said.

At around 8:15 p.m. local time on Saturday, an Edmonton police officer was working traffic control duties at a Canadian Football League game between the Edmonton Eskimos and Winnipeg Blue Bombers.

The officer was patrolling a road southwest of the Commonwealth football stadium. At that time, a male driving a white Chevrolet Malibu crashed through the traffic barricades that were separating vehicles from pedestrians at high speed.

The officer was hit and went flying 15 feet through the air, the Edmonton Police Service (EPS) said in a statement.

A male, believed to be 30 years of age, got out of his vehicle and began stabbing the officer with a knife. The attacker then fled, and the officer was taken to hospital.

Later on Saturday just before midnight, a U Haul truck was pulled over on Wayne Gretzky Drive and 112 Avenue in Edmonton. An officer asked to see the driver’s license and recognized the name as being similar to the registered owner of the Chevy Malibu involved in the earlier incident.

The truck driver then immediately fled the scene, but police officers pursued it as the driver deliberately attempted to hit pedestrians. The EPS said four civilians were hit by the truck and taken to hospital with multiple injuries.

The U Haul truck eventually flipped over, and the driver was taken into police custody.

Police believe the two incidents are related and said they are being investigated as “acts of terrorism.”

This report from the CBC gives the perp’s name, Abdulahi Hasan Sharif. Other news sources identify him as a Somali national:

The man arrested in a suspected terrorist attack in Edmonton that saw a police officer stabbed and several pedestrians run down with a cube van on Saturday night was known to law enforcement, says Canada’s public safety minister.

Public Safety Minister Ralph Goodale said in a news conference on Sunday in Regina that the suspect, who is in police custody, was on a “police watch list.”

“The individual had apparently some appearance on a police watch list, but that is a detail of the investigation that the authorities will pursue in the appropriate way,” Goodale said. “There are no conclusions that can be drawn at the current time.”

8 thoughts on “Jihad Terror in Edmonton”