Update: The suspect has been identified as an Uzbek national named Sayfullo Habibullaevic Saipov. 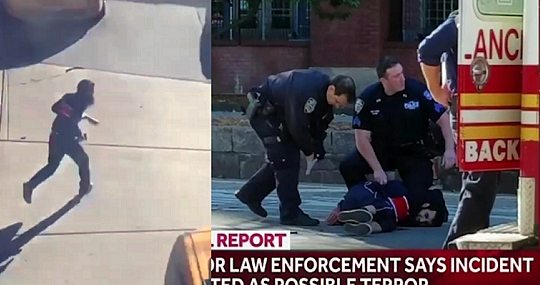 As you all know by now, there was a major Islamic terror attack in Lower Manhattan today. At about 3:15pm a man driving a rented pickup turned onto a bike path on the Lower West Side, running down pedestrians and cyclists at high speed. When he saw a school bus, he deliberately swerved to hit it. With his vehicle disabled, he got out and started running and shooting. Some reports say his guns were fake, others say one was fake and the other real, and still others that it was a BB or pellet gun.

The cops arrived quickly and shot the perp in the gluteus maximus (some reports say “leg”). He is now in the hospital under arrest.

At least six people were killed; some reports say seven; others eight. Another fifteen or so are reported wounded. There are multiple reports by eyewitnesses who say they heard the driver yell “Allahu Akhbar!” when he exited the truck. Also note his long beard with no mustache.

The following video was excerpted from the NBC live stream. It seems unusual for a major MSM outlet to emphasize the “Middle-Eastern appearance” and “Allahu Akhbar” so early in the reportage, but that’s what the guy does.

Many thanks to Vlad Tepes uploading this video:

26 thoughts on “Islamic Jihad in Manhattan”