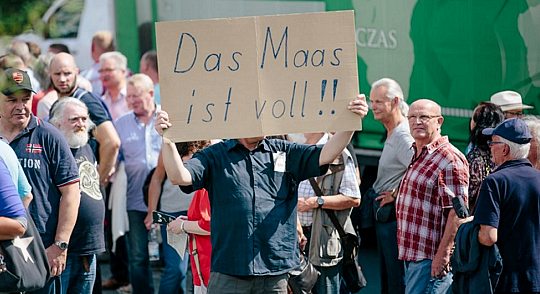 Below is an open letter recently published by the political news portal Cicero Online. JLH, who translated the piece, has this to say about it:

A very revealing letter from one former East German to another, and in a sense, one icon to another. Very revealing of the psychology and feeling behind PEGIDA, and why the revolt against Merkel took shape in the East.

An open letter to Wolf Biermann[1]: “Anyone who has learned to value constitutional democracy will not willingly give it up.”

We have known each other since 1990, in the common hunger strike with Bärbel Bohley and other civil rights activists in the East Berlin Stasi Central. I had already admired you before that, because of your songs, which I typed out and distributed. At the time, I was the only member of the SPD who joined the strike for the opening of the Stasi files, and for that, I was defamed by Wolfgang Thierse. You know that I am no coward. And the majority of East Germans know it too.

It is too bad that you had no opportunity to speak with the many citizens I have come to know in Dresden in the past years. Of over 500 letters we received from citizens in the Saxony state headquarters, more than 90% complain that they never received an answer from mayors, representatives, district commissioners or other agents of the establishment to their petitions, letters and inquiries. They felt they were unwelcome, mocked and on top of that, decried as racists.

Chancellor Angela Merkel lands in Heidenau (see n. 7) in a helicopter, wafts away an hour later and has solved not one problem. She advises a cleaning lady to invest her pittance in a Riester pension fund, thus demonstrating that she knows nothing about the living conditions of citizens. She says not one word about the systematic exploitation of families by the pension/social security system deplored by social judge Jürgen Borchert. And she has the chutzpah to promise a rise in child allowances, which are merely the “return of stolen goods” i.e., nothing other than the unconstitutional taxation of the bare minimum for children.

Merkel disappears and leaves us citizens alone with the ever-present danger of terrorism. Worse yet, the “lacuna media” whispers soothingly to us that hundreds of thousands of unregistered, illegal immigrants are really not dangerous — numerous Islamic terrorist, knife and truck attacks notwithstanding. The government is silent about the loss of control. They, after all, are not affected. But when the politicians see themselves in danger, “Merkel barricades” are set up — as on October 3, 2016 in Dresden. Heavily armed snipers lurked on the roofs. True to the motto of the SED,[3] — “Where there is no victim, there is no perpetrator” — the victims of Islamist terrorist attacks were swept under the rug. The woman representing the Breitscheidplatz[4] victims was hastily disinvited.

The East German populace sees through those in power who are circumventing basic civil rights (Article 16 of the Constitution)[5]. People are afraid of what is coming at them. Since Merkel does not follow the law, Horst Seehofer’s analysis of the “Rule of Injustice” applies. Merkel has single-handedly abrogated norms and regulations.

There is no evidence of a political culture here. I miss the anti-totalitarian consensus, I miss the open discussion of contentious subjects; I miss the respect for dissidents. A self-appointed caste of elite “opinion-makers” employs terms like tolerance, whose meaning they then subvert. Anyone who follows the press daily knows of journalists who suppress the truth, knowing full well that the people are being informed via the internet, exchanging information with relatives and friends in the west of Germany, witnessing conditions (in Berlin-Neukölln, in Duisburg-Marxloh, in Essen). After all, there is no wall anymore. Someone who compares ISIS with peaceful Pegida demonstrations must really hate dissidents.

No debates, lots of consensus

The Islamologist Bassam Tibi feels the absence of a debate culture that does not anathematize everyone with a dissident opinion and pummel them with arguments like “because… shut up!” How is a citizen to express dissatisfaction? The lacuna media and the parties maintain that it is not proper to go to the streets. Many are now voting who did not before. They are being called stupid, because they didn’t mark the “correct” candidate. But the East German chose neither Altmeier nor any number of princes of the Church, but instead reached for the AfD. As is known, non-voters strengthen the strongest party. Spreading anti-democratic calls like that of Peter Altmeier (“Better not to vote than vote for the AfD”) bespeaks a totalitarian mindset.

My grandfather, too, was a Communist and fought in the underground against the Nazis. He was a simple tool-and-die maker and later joined the newly formed SED. That changed after June 17, 1953, when he threw his party book down at the feet of his comrades. He had not shown civil courage against the Nazis and put his family in danger only to now find his comrades in prison again. He did not intend to support Nazis in a red disguise. From then on, he was regarded as a traitor. I resisted the second German — the Communist — dictatorship and was accordingly defamed as “hostile-negative”, and punished by being spied on and crippled in my profession. I had to endure Communist guilt-by-association and poverty with three children in the GDR (German Democratic Republic). I do not want to endure a third dictatorship on German soil — certainly not an Islamist one.

Where is the protest against Islamists?

That is why I support Sabatina James, who converted from Islam to Christianity, was targeted by a death fatwa , and lives in the underground under permanent personal guard. Her organization helps many Christians in the same situation. By what right may aggressive Islamists threaten peaceful German citizens because of their faith, and go unpunished? What are our ruling parties doing about it? And that is what has happened to the Muslim, Seyran Ates, who is living under a death fatwa, because she founded a liberal mosque in Berlin. Where is the protest from the majority of Muslims allegedly living here so peacefully?

Dear Wolf, as a Christian and an admirer of Václav Havel, “I want to live in the truth.” I don’t close my eyes to reality just because that suits the parties. I am a member of CDU and stand by the CDU program of 2002, which is now being represented by AfD. If someone has to go, then it is definitely not me — it’s Merkel.

After 1990, I listened in sadness and anger to hundreds of life stories of persecuted victims of the SED. In the Citizens’ Advice Office and in my organization, I tried to help — to organize conversations of contemporary witnesses, effect rehabilitations — and was slandered for it by the successors of the SED. “Where there are no victims, there can be no perpetrators” — by this device, they hope to conceal their crimes and deceive naïve contemporaries. To this day, the progeny of the SED refuse to use their unlawfully gained wealth to compensate the victims.

I understand the sadness, the rage, the hopelessness, the helplessness, the paralysis of many of my East German fellow citizens in the face of their political, legal and social disenfranchisement. And I understand their voting decision, which was mine as well. When the law is applied by a double standard, the society disintegrates. Justice is the same for everyone, or it is injustice. A prerequisite for democracy and freedom is the rule of law. Anyone who has learned to value the rule of law — like citizens of the GDR imprisoned in an unjust state — will defend it and not give it up again. At every Pegida demonstration in Dresden, one poster is held aloft: “Because we know slavery, freedom is sacred to us!”

In the GDR, the word was: Whoever is not for us is against world peace. Today it is: Whoever votes AfD is a Nazi. There is no worse slander. Anyone who can put up with that has the courage to dissent. No, we are not cowards. Anyone who dares to join Pegida must expect to be personally and professionally persecuted and harassed. Did you[6] know that former President Gauck said the following: “The elites are definitely not the problem. At the moment the people are the problem.” Is there any better proof of the arrogance of power and the courage of citizens who defy it?

With warmest greetings and the hope that you will take my arguments seriously,

[Photo: Pegida demonstration in Dresden: “The East German people see through those who govern us.”]

5 thoughts on ““Because We Know Slavery, Freedom is Sacred to Us!””