A Turkish Islamic zealot and cult leader named Adnan Oktar has been shipping propaganda materials to be distributed in Bucharest. Romania has a relatively small Muslim population — less than half a percent — compared with its southern neighbor, Bulgaria, which is more than 12% Muslim. So why this sudden push to do da’wa in Romania? And why is a mega-mosque being planned for Bucharest?

Our Romanian correspondent cxt sends the following report on the puzzling affair of Turkish propaganda in Bucharest. 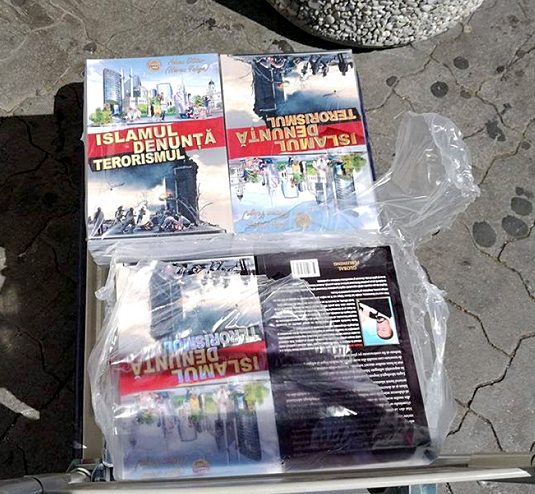 This website shows pictures of books and fliers that were left in malls and post boxes in Bucharest on August 13th, 2017.

A translation of the text:

Pro-Islam Propaganda has Appeared in Romania. In the Capital’s Malls and Apartment Buildings, Materials for Brainwashing Romanians have Appeared

Such pro-Islam materials were distributed in the capital’s malls on August 13th. The photos you see here are from Vitan Mall.

Judging by the superior quality of the printed paper, it is obvious that the distributors were not concerned with costs. By following the contact link in the leaflets, we find that Turkey is the host of this website. Interesting, right? And we are building them a mega-mosque, because there are going to be a lot of them, aren’t there? Let us wake up, for the purpose of this propaganda is nothing other than to prepare Romania for the wave of false refugees.

I include the translation not because it is particularly interesting, but to provide some context for the photographs at the link above. 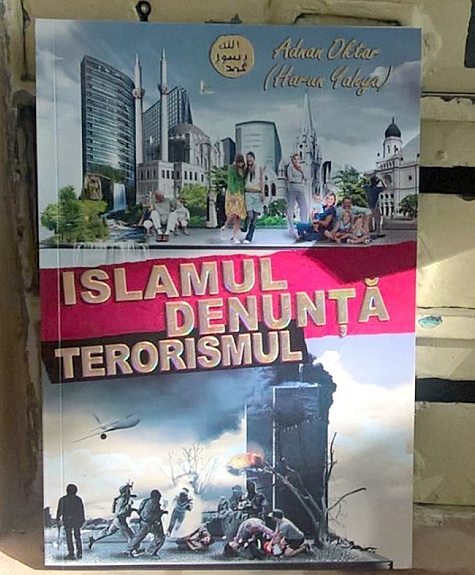 I did a little bit of research and I managed to find the books and fliers distributed in Bucharest here. The so-called book “Islam denounces terrorism”, available to download at the previous link, is pure Islamic propaganda along the lines of “Islam is the religion of peace”. The so-called book is full of images of white people, especially white blonde children, with a giant mosque in the background. This can be noticed straightaway from the cover. The author of this so-called book is Adnan Oktar (other names used: Harun Yahya, Adnan Hoca).

From his Wikipedia entry:

Adnan Oktar (born 2 February 1956), also known as Harun Yahya, is a Turkish author as well as an Islamic creationist. In 2007, he sent thousands of unsolicited copies of his book, The Atlas of Creation, which advocates Islamic creationism, to American scientists, members of Congress, and science museums. Oktar runs two organizations of which he is also the Honorary President: Bilim Araştırma Vakfı (BAV, literally, “Science Research Foundation”, established 1990), which promotes creationism and Milli Değerleri Koruma Vakfı (literally, “National Values Preservation Foundation”, established 1995) which works domestically on a variety of moral issues.

In more recent years, Adnan Oktar has been known for his televangelism on his TV channel, A9 TV, noted especially for featuring ‘kittens’, his female devotees. His organization is commonly referred to as a cult, and he has been described as the “most notorious cult leader in Turkey.” Oktar filed more than 5000 lawsuits against individuals for defamation in the last decade, which led to the blocking of a number of prominent websites in Turkey.

In the early 1980s, Oktar gathered young students around him to share his views of Islam. These students belonged to socially-active and prosperous families of Istanbul. From 1982 to 1984, a group of 20 to 30 was formed. They were joined by private high school students who were from socially active and well-known families with a high economic status who had become newly religious. Yüksel said Oktar presented his teachings “gently and in a modern fashion to the children of the privileged class, without intimidating them … a refined and urbanized version of Said Nursi.” In his religious teachings, Oktar argued against Marxism, communism and materialistic philosophy. He attached special importance to refuting the Theory of Evolution and Darwinism because he felt that it had been turned into an ideology used to promote materialism and atheism, and numerous derivative ideologies. He personally funded a pamphlet entitled the Theory of Evolution which combined “mysticism with scientific rhetoric.”

Throughout the 1980s and early 1990s, Oktar built up his community. His followers were especially active recruiting at summer resorts along the Sea of Marmara. The social organization within the group became more hierarchical and took on a Messianic nature.

In 1990, he founded the Science Research Foundation (SRF, or, in Turkish, Bilim Araştırma Vakfı, or BAV). Oktar founded the Science Research Foundation to hold conferences and seminars for scientific activities “that target mass awareness concerning what the real underlying causes of social and political conflicts are”, which he describes to be materialism and Darwinism, though some media describe the BAV as “a secretive Islamic sect” and “cult-like organization, that jealously guards the secrets of its considerable wealth”.

Oktar has been preaching about the “Turkish-Islamic Union”, which would bring peace to the entire Muslim world under the leadership of Turkey. In 2007 he sent out thousands of unsolicited copies of his Atlas of Creation advocating Islam and creationism to schools and colleges in several European countries and the USA.… In some cases he was successful in blocking high-profile websites in Turkey for slander (see “Blocking Internet Sites” below), including that of Richard Dawkins, as well as the complete WordPress-site.

His publications argue against evolution. They assert that evolution denies the existence of God, abolishes moral values, and promotes materialism and communism. Oktar argues that Darwinism, by stressing the “survival of the fittest”, has inspired racism, Nazism, communism and terrorism. An argument not unexpected in Turkey when during the political turmoil before a 1980 military coup, communist bookshops touted Darwin’s works as a complement to Karl Marx.

Truman State University physicist Taner Edis, who was born in Turkey, says the secret to BAV’s success is the huge popularity of the Harun Yahya books. “They’re fairly lavishly produced, on good-quality paper with full-color illustrations all over the place,” he says. “They’re trying to compete with any sort of science publication you can find in the Western world. And in a place like Turkey, Yahya books look considerably better-published than most scientific publications.” 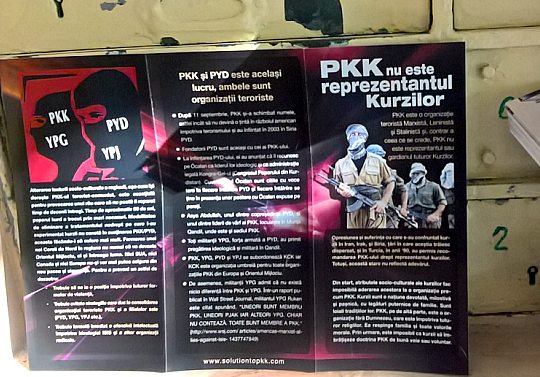 After a brief look through “Islam denounces terrorism”, the so-called book is a mash-up of all the ideas mentioned in his Wikipedia page (yes, everything). It is clear this has been edited specifically for the Western world, to promote the message that once you convert to Islam your life will suddenly become paradise (with a giant mosque in the background, bunnies and deer hoping around, doves, flowers, butterflies etc.). As for why these books and fliers have been distributed, there could be several reasons or a combination of reasons, for example:

4 thoughts on “Adnan Oktar and the Islamization of Romania”