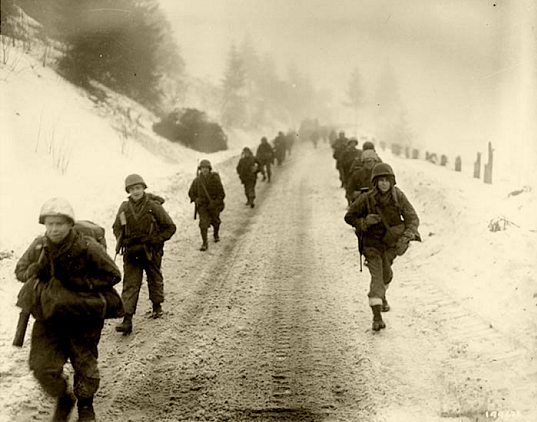 Most European countries make it difficult (if not impossible) for ordinary citizens to acquire firearms legally. Unlike their American counterparts, European patriots are generally unable to gather and train together as part of an armed militia.

In a recent post at the blog European Civil War, Michael Gladius makes an argument for European patriots to join the reserves or National Guards of their respective countries in order to prepare for the next phase of the Counterjihad.

Below are excerpts from his excellent article:

Why Preservationists Should Join the Military Reserves

Not everybody can be an activist, especially on the right. The left-wing activists have more sponsors and wealthier sponsors than the right has, and they have been doing this for far longer. Right-wingers need to ask permission from the state to do anything, whereas left-wingers can act with impunity, protected by the police power of the government. Right-wingers need months to plan a rally, whereas leftist thrall-masters can summon a riot within hours. When it comes to virtually all conventional methods of power, the left holds a near-monopoly.

So what can the right do? There are already several successful activist groups, particularly Generation Identitaire and its various iterations, but for various reasons many patriots cannot get involved with these activist groups on a regular basis.

The answer lies in the army reserves. If European patriots joined the reserves en masse, the balance of power would shift dramatically in our favor.

What are the reserves?

War is expensive, and standing armies are a massive drain on a nation’s resources. For peaceful nations, small nations, or poor nations these costs are prohibitive. Even bigger and wealthier countries would prefer to spend as little as possible on their militaries, unless they are at war. The reserves are a way to balance out the need for a large body of trained soldiers with the desire for a small, inexpensive army. When a man joins the reserves, he goes through basic training, same as a full-time soldier. When he finishes training, he returns to civilian life and is required to drill once a month. In time of war, he may be re-activated, and called up for duty. When this happens, he normally undergoes a period of a few months to refresh his skills before being deployed.

Switzerland is famous for mandating military training for its entire population (which I personally think should be copied across the West). Being a small, peaceful country, it has maintained a policy of iron neutrality for 500 years through this system. Other examples throughout history include the Spartans, Romans, Germans, Israelis, and Boers. The Israelis in 1948 and the Boers in 1899 are the most suitable for our scenario today. This will be the subject of a future article.

Advantages of joining the reserves

In a military, there are combat units, auxiliary units, and a chain of command to ensure these are coordinated and organized. Basic training varies from country to country, but is generally no shorter than three months. Compare this to gun clubs and tactical schools in the United States and Europe, which normally only offer classes on weekends (many of them will, however, offer courses for law enforcement personnel on weekdays… hint hint). These basic skills are highly perishable, and require time and qualified teachers in order to be effectively ingrained.

The first advantage of joining the reserves is that patriots do not have to quit their jobs to join. Once training is complete, reservists will return home, and pick up where they left off. It would be impractical for every European patriot to join the army full-time, but this is not the case with the reserves.

The second advantage of joining the reserves is legitimacy. It may seem odd to join the armies of the nation-states conspiring to replace us and our way of life, but the left has no qualms about milking the state for money and wielding its conventional power. Neither should we. If the right breaks away from the nation state, then we are only another gang in a lawless landscape. If the nation-state collapses, the gangs will survive, but so long as the state remains, the left will ensure that it hunts us down first. By joining the reserves, we will show our loyalty to our nations (if not the politicians running them), and be able to claim legitimate use of force against lawless Islamo-leftists. If we are reservists, then the state cannot declare war on itself without consuming itself and rendering itself irrelevant.

The third advantage of joining the reserves is the need for effective leadership. The right currently lacks a unified command structure, outside of activist groups. Contrary to common perception, the many activist groups on the left are not centrally controlled. Each is capable of independent action, while simultaneously having an efficient and effective communication network that allows collaboration and co-conspiracy. If one leftist group throws a protest, the others join in, even if their goals are only tangentially related.

By joining the reserves, the right can organically develop command structures on a regional basis (i.e., among fellow reservists and police/fire volunteers in our hometowns). Having a decentralized, localized command structure like this will enhance our own legitimacy, while also allowing the scattered groups to come together for larger actions. These small, scattered groups will need to maintain connections to right-wing activist groups, in order to both inform and be informed of changes as they occur.

The fourth advantage of joining the reserves is that the state pays for it, not us. The left is bankrolled and sponsored by banks, the merchant class, large financial institutions, and taxpayer dollars.

The right is not. By joining the reserves, we will be able to train and prepare at the state’s expense, and save our private funds for other projects. Plus, reservists’ pay/stipend can supplement the patriot’s income handsomely.

The last advantage of joining the reserves is that it can serve as a tool for cultural revival. From the beginning of time, men have always been the warriors. Womanhood happens automatically, manhood does not. Young men are usually more enthusiastic about fighting than the elders, and need rites of passage into manhood. The modern state of affairs does not offer anything to satisfy this need. We on the right must fill it in, day by day.

26 thoughts on “Why European Preservationists Should Join the Military Reserves”