MC’s latest essay touches on a subject that has been the topic of overheated discussion for the past month or so.

It is very difficult for socialists who believe that man is god to accept the superiority of Judeo-Christian culture. It does not fit with their religious beliefs and zealotry so, somehow, they must discredit it,

The way they do this is to employ their usual ‘turn it into a skin color problem’ meme and thus to hide it behind their own well-projected definition of racism. The sheer flexibility of the accusation of ‘racism’ makes this very easy to do, and we, like Eloi, take the bait every time and without ever stopping to think or to criticize.

History is replete with the disastrous effects of new weaponry. The minie ball rifle was responsible for the carnage of the Civil War. The aeroplane brought war to the home front. And television brought the war into the front room.

Yes, there is a war actually going on inside the homes, a mind-bending propaganda war to destroy white supremacy using the very technology that white supremacy has endowed to the world.

Those who define the Narrative now control the battlefield and thus the result:

The smart way to keep people passive and obedient is to strictly limit the spectrum of acceptable opinion, but allow very lively debate within that spectrum — even encourage the more critical and dissident views. That gives people the sense that there’s free thinking going on, while all the time the presuppositions of the system are being reinforced by the limits put on the range of the debate.

Because television is a one-way pipeline it has an exceedingly powerful influence, and with it, the ability to define new ‘truths’ and to redefine old ‘truths’. It is these neo-truths which are so dangerous. We all know that “Cleanliness is next to Godliness”, but how many of us know where in the Bible to find it?

I have twice written in these pages about the Narrative as a deadly weapon, and each time been strongly criticized by those who cannot see the difference between questioning the Narrative and intellectual treason. I have been accused of being unscientific when the whole of science should be about the questioning of narratives.

Television makes it terribly difficult to question those things that people hold dear. Questioning presents people with dilemmas that they don’t want to confront. It opens vistas that are uncomfortable. While the television tends to soothe the psyche, the questioner travels in lands abhorrent to many.

On the whole, people don’t want truth; they want unchallenged comfort zones, and will answer the challenge with an ad hominem attack and a ‘no platform’ demand rather than stop and check the facts.

It is when the Narrative is defined, delivered and defended by one particular politico-religious sect that we are in for a rough ride. Socialism, for all its emotional desirability, has a bad track record, and this latest iteration of it is showing the same old warts as the previous iterations of socialism known as Communism and Nazism. The current iteration of cultural Marxist socialism with its emphasis on ‘equality’, moral relativism and emotional righteousness is potentially the most destructive yet, and seems to be intent on bringing down civilization as we know it. Do we really want to go back to living in caves?

Under this philosophy, Islam is elevated to the level of a political ideal to which all should pay attention, and Muslims are imported with almost no questions asked. A brown face is now a huge asset that opens many doors.

Civilization came from Judeo-Christianity and, by accident maybe, its core was in the white inhabited areas of the northern hemisphere. White ‘supremacy’ is actually Judeo-Christian supremacy, but there is another pseudo-supremacy which one might call white-skinned supremacy, and it is very easy to muddy the vast ocean that separates them. Brown people who enter into white supremacy can very easily assimilate and become a part of civilization, but those who can only see through ideological spectacles have difficulty separating skin color from geographical descriptors. A huge number of Americans of African origin are primarily Americans; some however, particularly those who have failed to assimilate well, or have other agendas are primarily skin color-sensitive. White people, too, can also fail the civilization test, and these are the ones who believe that the causation of civilization is a white skin. Between the brown-skinned supremacist and the white skinned-supremacist, there is very little difference, and both tend to detract from civilization.

A third category is the religious supremacist. This is the type of person who believes intrinsically in a politico-religious meme and that his definition of ‘civilization’ is superior to that which currently exists, and thus the huge gamble of replacing civilization is worthwhile. These are the really dangerous people, because, for them, the ends justify the means, and they will willingly set nation against nation:

This describes the penalty of throwing out the Judeo-Christian heritage in the last days, and thus far I cannot fault it. Especially the idea of ‘hate’ crimes…

The Ferguson effect is still in its early stages. What police chief is now going to risk life, limb and job by policing events like Charlottesville when sitting on the fence (or hiding behind it) is much the preferable and risk-free action? Social order be dammed when hard-pressed policemen risk political crucifixion of their careers and their lives for doing their jobs and enforcing the law on dark lefty orcs and imported Craig’s List rent-a-mobs.

So there was no law on the streets of Charlottesville that day, only the laws made by media puppeteers and the jornolists: the laws of brown-skinned supremacy.

The US of A is the ultimate target for the vast majority of immigrants. Is that because of Black Lives Matter? Not at all. It is because of a thousand years of Judeo-Christian culture and at its apogee a Constitution and Bill of Rights which enshrined and crowned the efforts of Americans to form an all-inclusive culture, an American dream.

So why do Muslims go to the Land of the Free? To live a better lifestyle? Or to bring their own Shariah bondage with them? I don’t know the answer to that, but I can see the results.

If the Left get their way and rebuild the USA in their own image, what will it look like? When the Prairie states have their produce confiscated by the FDA and the EPA, what will the streets look like? 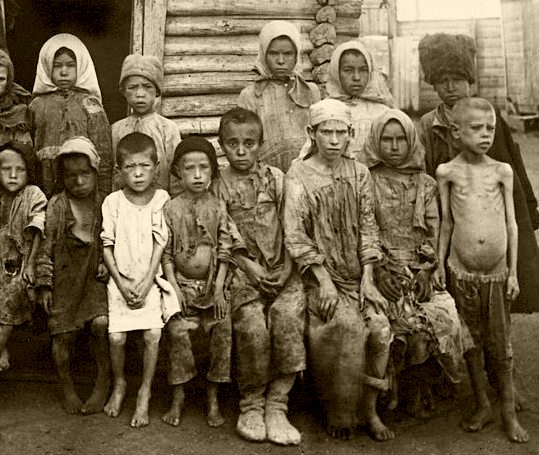 Is this what the DNC wants? Because that is what happens when socialism gets control (or should I say gets out of control). These Ukrainian children were born into a land of plenty, but the communists decided that there were too many of them, so they starved them to death. The Communists played god, and innocents died in their millions.

There is a lady here in Sderot who was there. She was put on a train by her parents to try and get her out of the starvation zone. She remembers being put off the train at a lonely station (out of the zone) and eating grass to stay alive. She survived because someone took pity on her.

The Holodomor was just one atrocity in a despicable list of cruel 20th-century inhumanity, and this is what the leftists want for YOUR children and grandchildren. They might have the best of intentions and motives. They might want cradle-to-grave welfare for all. They may want free medical care for all. Yet they always seem to forget that it has to be paid for, and the price is very, very high. The degree of welfare becomes disproportionately more expensive as it progresses, the costs having to be borne by fewer and fewer people as the coverage inevitably increases.

Mention should also be made of the Armenian genocide by the Young Turks who are described as nationalist, progressive and revolutionary and who decided to eliminate all the Armenian Christians in Turkey to add another 1.5 to three million to the bill.

And somehow we are meant to forget all this and to let them try their social experimentation all over again.

But this time the coercion is much more subtle and so, so much enhanced by media brainwashing. So many people actually believe that this time they can dodge the inevitable ball, that they can suck at the udder without feeding the cow.

Socialism itself is a newish form of an old, old problem, that of elitism, where those who are well-placed believe that they have the right to impose their will and religion on those not so well-placed. Elitism is older than white civilization. It is the coffin into which many ancient civilizations tumbled as they got tired and lazy. They imported slaves to do the work that they themselves felt too ‘important’ to do, and the slaves brought with them their own gods and cultures, and thus replaced the indigenous population.

White civilisation was different for a while because of responsibility shared among all citizens; that is, until the citizens found that their representatives were corrupt and nothing could be done about it because all the mechanisms of change were systematically choked. They had been betrayed. The Federal monster had grown fat, and inert, and in its unwashed state, stank of corruption.

The white-supremacy based civilization so painfully achieved over a few hundred years, and shared with many of non-white skin color, is now a casualty of a war that is supposedly a battle between brown-skinned supremacy and white-skinned supremacy, but which is in reality nothing but a divisive ploy to recreate the same old feudalism of old. See the photo above, that is what these globalists want for you and yours, and this globalism is not only Jewish:

He’s five foot-two, and he’s six feet-four,
He fights with money and with hype.
He’s all of thirty-one, and he’s only seventeen,
Been a globalist ’cos he’s got a gripe.

He was a Catholic, a Hindu, an Humanist, a Jain,
A Buddhist and a Baptist, perhaps a Jew.
Now he has a bitter pill,
But he knows its destiny’s will,
That he kill you to achieve his aim.

And he’s fighting against Society,
He’s fighting for elites,
He says it’s for the peace of all.
He’s the one who must decide,
Who’s to live and who’s to die,
And never sees the overarching flaw.

With apologies to Donovan, who saw the problem many years ago.