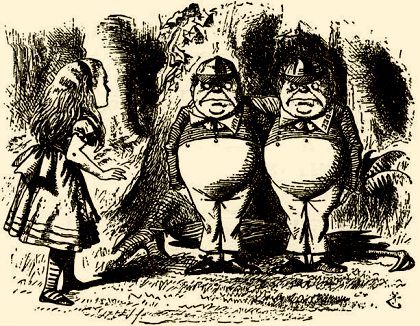 The only significant competition in this month’s German elections is the contest between Chancellor Angela Merkel (CDU, Christian Democrats) and Martin Schulz (SPD, Social Democrats). Since the CDU and the SPD are the two major parties in the ruling Grand Coalition, this is really just an intramural squabble over who gets to be the Big Boss Man or Big Boss Chick. After the vote, the Grand Coalition will remain in power, and Germany will end up being ruled by either Tweedledum or Tweedledee.

Tweedledum and Tweedledee held a big debate over the weekend. The following video from the AfD (Alternative für Deutschland, Alternative for Germany) features remarks by Alice Weidel, one of the leaders of the AfD. According to the notes accompanying the video:

Alice Weidel, the top candidate for the AfD, had a few words during today’s press conference about yesterday’s chancellor duel between Angela Merkel (CDU) and Martin Schulz (SPD). The federal election is on September 24th. Choose AfD!

8 thoughts on “Tweedledum vs. Tweedledee: Who Won?”