Our English correspondent Seneca III sends these thoughts prompted by today’s bombing in the London Underground. 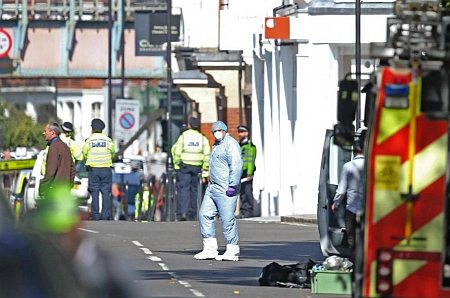 Today’s Londonistan Bombing: A Prophecy, a Warning, a Question and an Answer

The perpetrator(s) of this attack, if found, will likely be determined to be good, well integrated enrichers who were training to be astronauts, brain surgeons, budding footballers or victims of Grenfell Tower’s post-Ramadan exploding fridge cooking practices but have developed psychological problems because of Islamophobia… and it really will be nothing to do with Islam.

And, as you read this, the Met and the rest of the National Thought Police are busy reinforcing their massive Islamophobia/Hate Crime units and going into high gear searching for as many white native Brits as they can invent a crime to persecute for to the full extent of the law, possibly even for ‘carrying bacon with intent’.

Hence, if any of you out there are contemplating retaliation, do consider that, apart from being illegal, it tends to be expensive in terms of lives and infrastructure, even discounting those lives and those material and fiscal assets lost during whatever event(s) initiated that retaliation. The other side have already calculated such a response to their initiating action(s) and will have specifically targeted as much of the physical and psychological means available for such a response as they can, thus limiting the chances of success of any such endeavor.

On the whole, in-country pre-emptive strikes are far more productive, particularly if they are immediately followed through repeatedly until absolute removal of the threat is achieved, but that is no longer an option left open to us.

The fact that the long-term ideological and social re-engineering of our culture is in itself a pre-emptive strike (one initiated and sustained by our own governing elite) designed to enable the process of Islamiscation, our ethnic cleansing and the subjugation of the West in general really does beg a question…

…Can we make it through this night of doubt and sorrow, and do enough of us have both the courage and a willingness to accept the personal sacrifice necessary to ensure the freedom and survival of our children?

History records that if any group, tribe or culture refuses to fight to the death to preserve itself and its way of life it will become extinct. Only when this reality is understood and accepted for what it is can draconian retaliation with whatever is left, right down to the last man or woman standing, be generally accepted as the only remaining survival option.

And, in our case, and if initiated, when this retaliation is finished it must have been such that Islam will have either self-repatriated, been forcefully removed or physically eradicated from these islands.

So, think hard, fellow Brits, always bearing in mind that no one can enslave a man or woman who is prepared to die, and your decision time is fast approaching… if not already here.

Furthermore, if a rallying cry would be of any help I would suggest ‘Not One Madrassa, Not One Mosque, Not One Muslim left in this once green and pleasant land!’ or, in a writable distributable motif form, 3(NOM).

“The lamps are going out all over Europe…” and only you, the native peoples, can keep them alight.

— Seneca III, in what is left of Middle England this 15th day of September in the year 2017AD.

For links to previous essays by Seneca III, see the Seneca III Archives

56 thoughts on “Today’s Londonistan Bombing: A Prophecy, a Warning, a Question and an Answer”